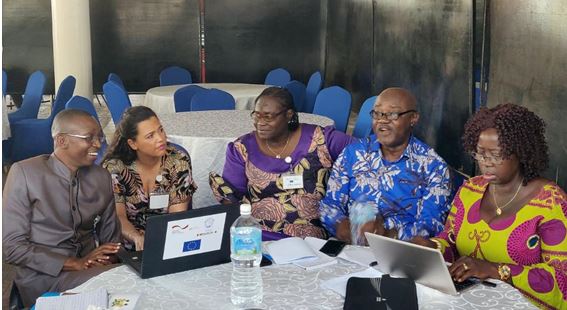 WDC Executive Director Elodie Daguzan (second from left), with participants in a workshop held during the meeting of the Mano River Union in Freetown, Sierra Leone, February 25-27, 2020, looking into supporting the effectiveness of the Kimberley Process Certification Scheme in Sierra Leone, Guinea, Liberia and Côte d’Ivoire.

Elodie Daguzan, Executive Director of the World Diamond Council (WDC), has expressed the WDC’s strong endorsement for the regional approach by the Mano River Union (MRU) to reinforce the effectiveness of the Kimberley Process Certification Scheme (KPSC), declaring that it will assist artisanal diamond miners gain better access to the legitimate diamond supply chain, while receiving fair value for their work.

Ms. Daguzan was addressing a meeting of the MRU in Freetown, Sierra Leone, held February 25-27, 2020. It focused on a program designed to enhance the implementation of the KPCS and includes capacity-building measures for the artisanal and small-scale mining sector, as well as addressing the prevention of smuggling of precious minerals and gemstones within and from the region.

The three-day workshop was called to design national and regional action plans to formalize artisanal and small-scale mining, with the goal of helping drive revenue back to the mining communities. The project is being implemented by the governments of the MRU—Sierra Leone, Côte d’Ivoire, Liberia and Guinea – with the support of Deutsche Zusammenarbeit (GIZ) and funding from the European Union and the German Federal Ministry for Economic Cooperation and Development.

“In terms of volume, artisanal and small-scale miners account for about 15 percent of rough diamond production, but they comprise more than 96 percent of the individuals who earn their living from diamond mining,” stated Ms. Daguzan.

“Regional initiatives that are designed to enhance the implementation of the KPCS should focus on allowing these communities to optimize the benefits they receive from their hard work, and their countries realizing the full potential of their natural resources. These include preventing the smuggling of goods across borders, better transparency and enhanced methods for monitoring the extraction and movement of diamonds, and improvements in the capacity to properly evaluate mineral output.”

“All of these are addressed in the MRU regional program,” she added.

The WDC Executive Director said that cooperative initiatives like the MRU’s regional program creates synergies that enhance the value of natural diamonds from the perspectives of both the mining communities and jewelry consumers.

“Just as rough diamond-producing countries contend that their nations should derive full benefit from their own natural resources, young consumers today demand that the products they buy must have social as well as monetary value,” she stated.

“The natural diamond’s capacity to contribute to the long-term wellbeing of people and communities in the producing countries should be considered an integral component of our product’s value proposition, for it also addresses the consumer’s aspiration for social significance. It should enhance the value of the jewelry in which diamonds are set, as well as the revenues that flow back to the producing countries, thus generating higher income for each of your individual nations.”

In her address to the gathering, Ms. Daguzan highlighted grass-roots capacity building projects that have been undertaken by WDC members in countries of the MRU. These include De Beers’ GemFair project in the Kono region of Sierra Leone, and the “My Fair Diamond” project of the Antwerp World Diamond Centre (AWDC), which was first launched in the Koidu region of eastern Sierra Leone and is now being expanded to the Banankoro region of Guinea.

Grass-roots projects carried out by industry, supported by regional programs like that of the MRU, will create the synergies “that optimize the artisanally-produced diamond’s potential as an economic and social force,” the WDC Executive Director said.