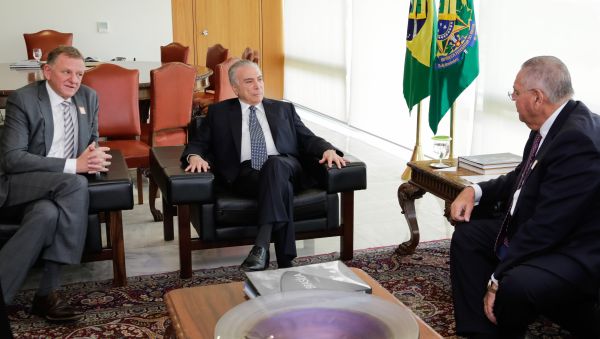 Volkswagen Caminhões e Ônibus has announced the largest investment package that the company has ever seen.

Volkswagen Truck & Bus’s Brazilian commercial vehicle brand is set to plow around EUR 420 million over the next five years into the steady renewal of its product portfolio, modernization of its plant in Resende, and the development of its connectivity services.

Andreas Renschler, CEO of Volkswagen Truck & Bus and the member of the Board of Management of Volkswagen AG responsible for commercial vehicle activities, spoke about the reasons behind the investment, saying:

“We believe – despite the current market situation – that Brazil is an important market for trucks and buses. It has always been a key market for the German industry and it will be again.

I am confident that the Brazilian economy has bottomed out and will recover again in the next few years. In order to be prepared for this, we are now taking money into our hands to be able to continue to offer excellent products and state-of-the-art production. The entire Latin America region plays a major role in our growth strategy.”

Volkswagen Caminhões e Ônibus has led the market for the sale of trucks in Brazil for 13 years running. At the Resende plant, the company’s staff work together in close partnership with suppliers in a modular production system sharing tasks.

Roberto Cortes, CEO of Volkswagen Caminhões e Ônibus, considers this a crucial advantage in the tough economic situation at present: “We have been selling Volkswagen-branded trucks and buses for 35 years and our plant in Resende has been around for 20 years.

It is only through our innovative production concept which sees us work together under one roof with seven partner firms that we have been able to join forces to take the necessary action to overcome the current crisis and equip ourselves to deal with an upturn that is sure to come.”

Andreas Renschler, who is also Chairman of the Federation of German Industry’s Latin America Committee, joined Roberto Cortes in Brazil to brief President Michel Temer on the planned investments. Renschler took the opportunity to emphasize that:

“German companies think long-term. We might not be the first ones to venture into new markets. But wherever we are, we persevere in difficult times too.

Brazil in particular is a country with which we enjoy very successful business relations that go back decades and that will continue for a long time yet. That is why we are strengthening our commitment at Volkswagen Caminhões e Ônibus further.”