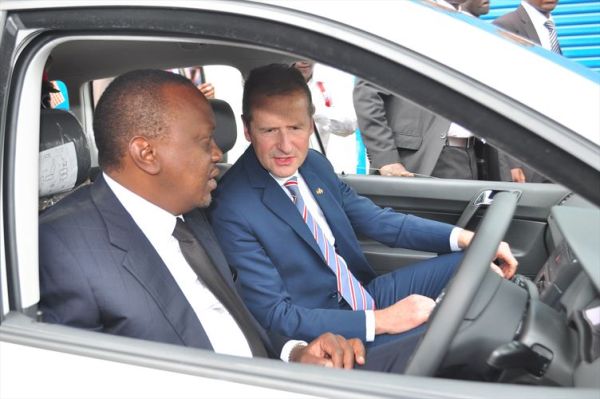 Photo caption:  President of the Republic of Kenya, Uhuru Kenyatta and Dr Herbert Diess, CEO of the Volkswagen Brand preparing to drive the first Polo Vivo built in Kenya off the assembly line.

•    Diess: “We are strengthening the production region of Africa and providing additional impetus for the regionalization of the brand.”

Volkswagen is forging ahead with the regionalization of its worldwide automobile business and today inaugurated a vehicle production facility in Kenya.

Together with the President of Kenya, H.E. Uhuru Kenyatta, Dr. Herbert Diess, CEO of the Volkswagen brand, was present when the first locally produced Polo Vivo rolled off the production line. With the CKD production of the bestselling car model in the sub-Saharan region, Volkswagen is stepping up its commitment to Africa.

This is a key step in the development of new opportunity markets – with the right products, local partners and training in the region.

At the inauguration, Diess underlined Kenya’s key role within the Volkswagen brand’s Africa strategy: “Volkswagen is strengthening the production region of Africa and providing additional impetus for the further regionalization of the brand – as a reliable and responsible partner.

This is symbolized by the first Polo Vivo produced – a car from Africa for Africa.” Diess also said: “Here in Kenya, we will be producing cars that bear comparison with European quality standards. This is why we are opting for training and local skills in automobile production.”

In addition to vehicle production, Volkswagen will be offering Kenyan customers a comprehensive package including a manufacturer’s guarantee as well as a maintenance and service plan.

Financing schemes will be developed together with local banks in order to allow individual mobility and to provide Volkswagen with the impetus it needs for its re-entry to the Kenyan market.

President Kenyatta said: “A few months ago, this was only a dream. Now Volkswagen’s investment in Kenya has become reality.

This is further proof of my government’s determination to strengthen the production location of Nairobi and to forge ahead with the industrialization of the nation.”

The joint project implemented together with DT Dobie in Thika near to the Kenyan capital Nairobi is Volkswagen’s third production plant in Africa, together with one plant in South Africa and one in Nigeria. In the initial phase, annual production of up to 1,000 vehicles is planned.

In the long term, it will be possible to produce up to 5,000 units per year at the plant of Kenya Vehicle Manufacturers (KVM).

The assembly facility is flexibly designed and offers the possibility of investigating the production of further models in the event of positive developments in the new car market. In addition, the Volkswagen Group recently announced plans to start vehicle production in Algeria.

For the start of production at Thika, the employees are being trained by Volkswagen Group South Africa. This will ensure that all vehicles have constant high quality levels. Volkswagen is also investigating possible approaches for the establishment of a sustainable, practically oriented training initiative.

Apart from school or academic training, young people are also to receive practical training in order to improve their employment prospects in the region as a whole.

Kenya is an opportunity market in Africa. The country has an outstanding position within the region of East Africa and has the most powerful economy in the East African Community (EAC) with a GDP of about US$63 billion. In addition, Kenya is a key transit country for trade throughout East Africa.

The good economic relations between Kenya and Germany are also being continuously and strategically expanded by the governments concerned.

Volkswagen and Kenya – this is a relationship with a tradition: Volkswagen already assembled the Beetle in Kenya in the 1960s. The Volkswagen brand is now returning to Kenya with its first model, the Polo Vivo.