United industry is key to future growth of diamond business 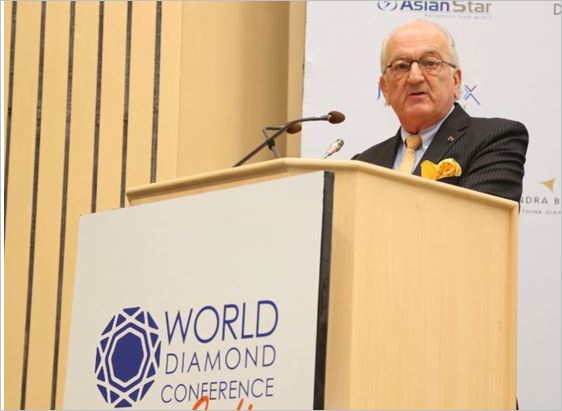 On an ongoing basis, the united leadership of the diamond industry is more inclined than ever before to continue formulating and implementing improved ethical business standards, said Edward Asscher, President of the World Diamond Council, in his address late last week to the World Diamond Conference in New Delhi, India.

Mr. Asscher was one of a group of industry leaders from India and across the globe to address the gathering, which featured opening speeches by the Indian Prime Minister, Narendra Modi, and the visiting Russian President, Vladimir Putin.

“The mandate of the World Diamond Council is to do everything to promote, support and defend the Kimberley Process and to represent the industry in negotiations with the governments,” Mr. Asscher stated. “Today the WDC also is looking at all the challenges surrounding the KP and to assess the risks around it.”

Noting the active role that the WDC plays in the Kimberley Process, which has been successful in reducing the incidence of conflict diamonds in the pipeline, Mr. Asscher emphasized that today the WDC is also focusing on educating KP member nations and organizations “to get more knowledge and coordinate the working methods and procedures, so that exporting and all importing countries use the same methods.”

Referring to informal meeting that had taken place in New Delhi just prior to the start of the World Diamond Conference, Mr. Asscher said that the heads of the industry’s various representative bodies had reiterated their support for WDC and its mission. “In the diamond family, as in any other family, there are sometimes differences of opinion,” he stated.

But ultimately that is superseded by common cause, he continued. “The WDC is a unique organization, for it requires that the most important leaders of the diamond industry must work closely together. After some public discussions it is my pleasure to confirm today that all organizations are now aligned in the interest of the total diamond industry,” Mr. Asscher said.

“The sum of our united organizations is in this way much greater than the sum of its parts,” he added. “And that is for the good of our industry. When you get to my age, one does not think of the next quarter or the next year – one thinks of the interests of the next generation.”