Tensions between Russia and Ukraine flared again. Indeed, Russia accused Ukraine of using terrorist tactics to try to provoke a new conflict over annexed Crimea – an allegation that is denied by Kiev.

Following the event, Ukraine put its army near Crimea and in eastern Ukraine on high alert. At the same time, Russia started military exercises and deployed large number of troops close to the Baltic, Black Sea States and Ukraine. 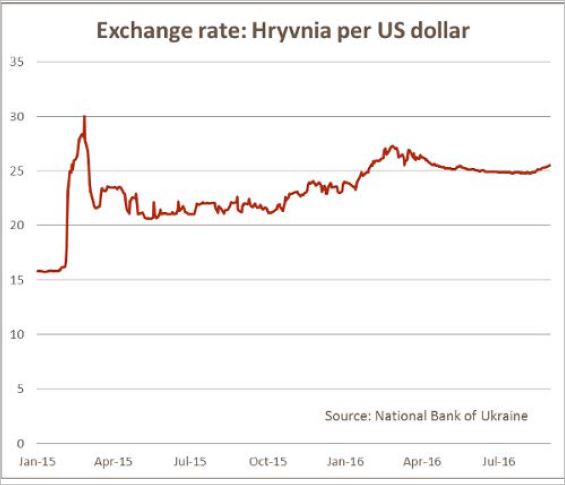 The aggressive rhetoric used by Russia could be a pretext to escalate hostilities. The tough rhetoric could also aim to inflame nationalist passion in Russia ahead of parliamentary elections scheduled on 18 September. This could also be a pretext to demand better terms for Russia in the Ukraine peace process.

Whatever the reasons, the recent tensions highlight mistrust between both countries and the risk of escalation. Indeed, no long-standing solution has been found yet.

The conflict remains unresolved and sporadic surges in violence occur. On the economic side, the exchange rate of the hryvnia against the US dollar depreciated only slightly (cf. graph).

The foreign exchange reserves remained stable at the end of July 2016 and the National Bank of Ukraine continued to gradually ease exchange restrictions. In this context, the cover policy remains unchanged.