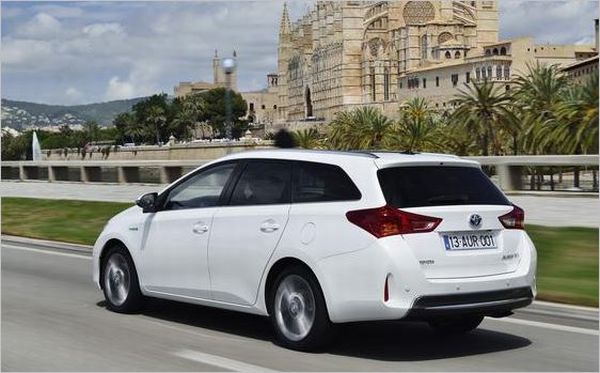 Hybrid models represent 23% of total sales in the quarter, up 2 percentage points on the previous year.

TME sales results were driven mainly by the increase of sales in Western Europe (+6.6%) and Central Europe (+19%). Sales in Eastern Europe (Russia, Ukraine, Kazakhstan and Caucasus) decreased by 28% in spite of a market drop estimated at -38%, allowing Toyota and Lexus combined market share to increase by 1.1 % to 7.7%. Turkey (+75%) and Israel (+9%) also recorded strong growth, both delivering their best ever Q1 sales.

Karl Schlicht, Executive Vice-President of TME said: “We have started 2015 with a good sales performance despite a very challenging environment in Eastern Europe. We maintained our market share in Western Europe and gained share in Central Europe (+0.8% points).

In Eastern Europe we outperformed the market, gaining more than 1% point share. We are glad to see that – in line with our strategy – Toyota’s performance is driven by core models produced in Europe, mainly by the new Aygo, Yaris and Verso and by Toyota Hybrid models.

Lexus delivered an impressive year-on-year growth thanks to strong demand for our more recent models, and better availability. For the remainder of the year we expect the upcoming launches of the new Avensis and Auris to further contribute to our annual sales.”

Sales of Toyota and Lexus Hybrid exceeded 52,000 units in the first quarter, an increase of 12% versus last year. Hybrid sales represent now 23% of total TME sales, an increase of +2 % points vs. Q1 2014, confirming the growing customer demand for our hybrid technology.

Lexus Hybrid sales increased by 40% in the quarter to 10,600 units.  Lexus Hybrid Drive represents 67% of the total Lexus sales, reaching 92% in Western Europe.

The Toyota Yaris Hybrid performed particularly well with sales reaching 18,600 units (+21%), highlighting the strong customer acceptance of the new redesigned model launched last year after the summer. In the first quarter, one Yaris out of three sold in Europe was a hybrid.

In the Auris range, this ratio climbs to one out of two.

The new Toyota Aygo is a hit, and sales increased by 30% in the first quarter, further building on its successful launch last year.

With 53,900 units sold in the first three months, the Toyota Yaris also showed a positive trend (+8%). Noteworthy is the 21% sales increase of the Toyota Yaris Hybrid, reaching 18,600 units, its best ever Q1 sales result.

Lexus sales achieved their best ever Q1 sales, with 15,800 units sold between January-March, representing a 37% increase versus last year.

The recently launched NX is greatly contributing to this success with sales reaching over 6,500 units over the first quarter, which represents more than 40% of Lexus sales for the period.

The strong performance achieved in the first quarter of the year is the continuation of last year’s strengthening of the brand and of the product line-up, and is in line with our target of achieving 60,000 units sales this year. 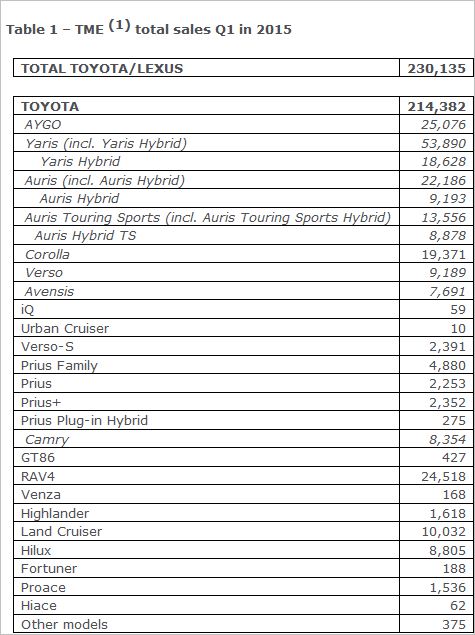 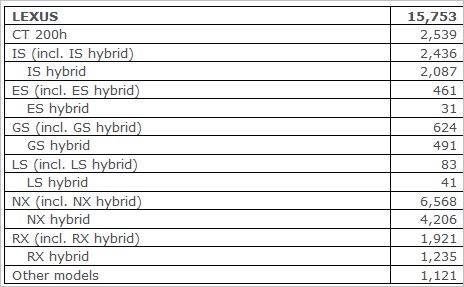 (1) Toyota Motor Europe is responsible for all Western, Central and Eastern European countries including Turkey and Russia as well as Israel and a number of Central Asian markets (Armenia, Azerbaijan, Georgia, Kazakhstan, Tajikistan, Turkmenistan and Uzbekistan).