– Production jubilee with Audi A3 Sportback

– Dr. Frank Dreves, Audi Board of Management Member for Production: “This success is backed by a strong team and an efficient production system.” 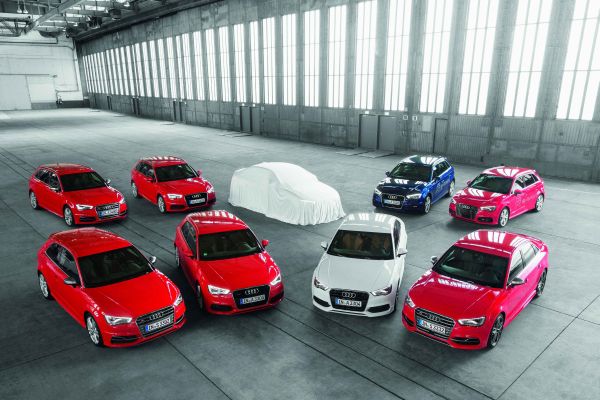 A major jubilee for the compact car from Ingolstadt: The three-millionth Audi A3 rolled off the assembly line today. The success of the A3 series began 17 years ago, when Audi established the premium compact class with this model. Meanwhile, the Audi A3 has conquered the roads of 117
countries. The jubilee car – a white Audi A3 Sportback 2.0 TDI quattro – will be delivered to its owner in the next few days.

“Three million automobiles in the compact class are quite a performance,” said Dr. Frank Dreves, Board of Management Member for Production at AUDI AG. “This success is backed by a strong team and an efficient production system. With the Audi A3, we have created a new brand segment – we have been setting standards in the compact class with innovative technology and first-class quality for 17 years now.”

“Since the middle of the nineties, the Audi A3 has become an important second pillar of our main plant in Ingolstadt, and thus makes a crucial contribution to the sustained protection of jobs at that site,” pointed out Peter Mosch, Chairman of the Group Works Council of AUDI AG. “Thanks in particular to the commitment and passion of our workforce, we have been able to write this success story.”

In 2012, Audi produced a total of 152,993 cars of the A3 series in Ingolstadt. That number includes the models Audi A3 and Audi A3 Sportback, as well as the S derivatives. The new Audi A3 Sportback has been on the market since February 2013 and is the model with the highest production volume at the Ingolstadt site: Each day, about 700 automobiles of this type roll off the assembly line.

Plant Manager Peter Kössler: “The sustained success of the Audi A3 spanning three model generations is also a demonstration of the motivation and commitment of the Ingolstadt team. This is also shown in particular by the rapid ramp-up of the new model and the excellent start-up quality.”

The company has made enormous investments in the new Audi A3 – for example in an ultra-modern body shop at the Ingolstadt site and in the expansion of the Hungarian site in Győr into a fully-fledged car plant with a complete process chain. Audi transferred parts of the Audi A3 production from Ingolstadt to Győr already in 2001.

This was due to the great success of the Audi A3 and the start of production of the new Audi A4 in Ingolstadt. Both sites together then produced the first generation of the Audi A3 Cabriolet and the Audi RS 3 Sportback.

In the middle of June 2013, the Audi A3 Sedan was added to the A3 series. It is the first model that the brand with four rings has produced completely in Hungary. As of early 2014, the sedan will be produced also at the new plant of the FAW-Volkswagen-Audi joint venture in Foshan, China.

Approximately 913,000 units of the first Audi A3 were sold. That worldwide success continued with the second generation (2003-2013), that further extended Audi’s lead in this segment in terms of technology and quality. Nearly two million cars of this generation have been delivered to customers.

In fall 2012, Audi launched the third generation, taking a great step into the future. The new Audi A3 and its derivatives feature elegant design, exclusive equipment and highly developed technologies, and are fitted with Audi connect as standard equipment.

For the driver, this system brings tailored Internet services directly into the car – from satellite navigation with Google Earth pictures and Google Street View to Audi music streaming and Audi traffic information online, or other online applications such as Facebook and Twitter.

The series sets new standards also in terms of resource conservation and low emission mobility: with the plug-in-hybrid Audi A3 Sportback e-tron – on the market as of 2014 – and the Audi A3 Sportback g-tron. The latter can run on climateprotecting Audi e-gas as well as on fossil-fuel natural gas. The Audi A3 g-tron will be delivered to customers as of late 2013.

In 2012, the Audi Group delivered 1,455,123 cars of the Audi brand to its customers, generated revenue of €48.8 billion and achieved an operating profit of €5.4 billion. The Audi Group is globally present in more than 100 markets and produces vehicles in Ingolstadt and Neckarsulm (Germany), Győr (Hungary), Brussels (Belgium), Bratislava (Slovakia), Martorell (Spain), Kaluga (Russia), Aurangabad (India), Changchun (China) and Jakarta (Indonesia).

The Group currently employs more than 70,000 people worldwide, including around 50,000 in Germany. Total investment of approximately €11 billion is planned by 2015 – mainly in new products and sustainable technologies. Audi lives up to its corporate responsibility and has strategically established the principle of sustainability for its products and processes. The long-term goal is CO2-neutral mobility.