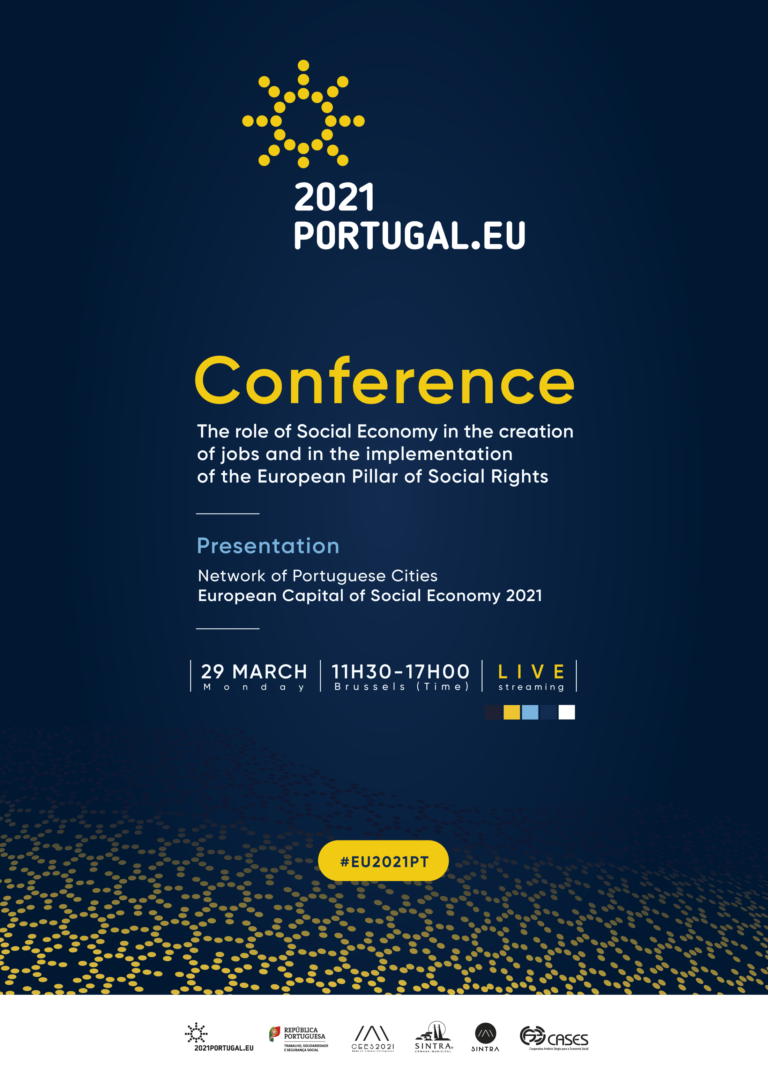 Portugal took over the Presidency of the Council of the European Union in a challenging context. With the motto “Time to deliver: for a fair, green and digital recovery”, the Portuguese Presidency will do its utmost to put into action the instruments that will place Europe in the path to recovery.

Moreover, Social Economy illustrates and defends the values on which the European Union is founded, contributing to the construction and consolidation of the European Pillar of Social Rights[1].

The forthcoming European Commission’s Action Plan for the Social Economy is under construction to be presented in the last trimester of 2021, during the Slovenian Presidency. We hope it can benefit from the wide public discussion which the Portuguese Presidency will promote.

The Video Conference The role of the Social Economy in the creation of jobs and in the implementation of the European Pillar of Social Rights, taking place on the 29th March 2021, aims to effectively contribute to this ongoing debate about Social Economy.

In this context, the Portuguese Presidency asked the European Economic and Social Council for an opinion on this same topic, coordinated by Giuseppe Guerini, which should be approved very soon[2].

Also the results of the Study commissioned by the European Commission on the “Social Business Initiative”[3] will be presented at the conference. The recommendations of this study will set the basis for the construction of the Action Plan for the Social Economy.

Moreover, on March 1st, the Commission published a roadmap for this Action Plan[4], open for public feedback until April 26th; and Social Economy Europe, which since 2014 has consistently defended the need for an Action Plan for the Social Economy, recently presented a document with its proposals for this Plan[5].

During 2021, Portugal also takes over the Presidency of the Monitoring Committee of the Luxembourg Declaration, that is to say, of the European Member States committed to Social Economy. In this context, the European Capital of Social Economy will also be presented during the Conference. Adopting the model of a Network of Portuguese Cities that assumes itself as the European Capital of Social Economy 2021, five cities – Braga, Cascais, Coimbra, Sintra and Torres Vedras – came together to build up this network that will promote several activities throughout 2021, of which we highlight five:  this conference, taking place in Sintra; the Ceremony of the António Sérgio 2020 Cooperation and Solidarity Award, at the end of April, hosted by Torres Vedras; An event on Social Innovation, in partnership with “Portugal Inovação Social” that will take place in Braga; The high-level Meeting of the Monitoring Committee of the Luxembourg Declaration, focusing on the “Action Plan for the Social Economy”, that will be held in Cascais; and  the Iberian Social Economy Meeting, focused on local, regional and cross-border development and internationalization, that will take place in Coimbra.