Tacy Diamond Pipeline to be published by Pharos Beam 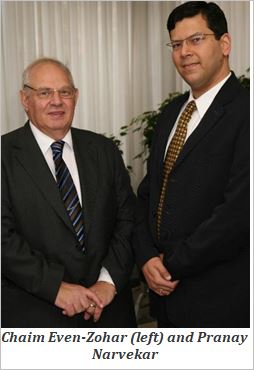 The Tacy Diamond Pipeline, which has provided an independent and unbiased view of the diamond pipeline since 1989 and serves as a guidepost and benchmark of industry value addition, will henceforth be published by Pharos Beam Consulting LLP in India.

The Tacy Pipeline pioneered the concept of counting every diamond only once and hence avoiding inflated turnover numbers. It has been used by various industry researchers for analysing the industry performance across years, establishing value addition and midstream performance and profitability. It has also served as the base for research reports put out by reputed consulting companies and has been used as evidence in arbitration and court proceedings.

The Tacy Pipeline has hitherto been published by Chaim Even Zohar through the Diamond Intelligence Briefs and other media. Pranay Narvekar, of Pharos Beam Consulting LLP in India, has been involved in developing the pipeline with Tacy Chaim Even-Zohar (left) and Pranay Narvekar since 2009.

To assure that the Tacy Pipeline will go from strength to strength throughout generations, Pharos Beam has worked closely with Tacy in preparing several previous editions of the Pipeline. It was announced today that the forthcoming 2017 Pipeline will be published by Pharos Beam, adhering to the proven methodology, and ensuring that the diamond industry can continue to use the pipeline consistently, as in the past.

Pranay Narvekar of Pharos Beam says, “The Tacy Pipeline is the starting point for any industry analysis and provides consistent and unbiased data for analysis without turnover based distortions. It is indeed a great privilege that we would be able to carry forward the Pipeline and our association in its development in the past gives us the confidence that we would be able to continue to provide this service to the industry in the same consistent manner.”

“I have always been fascinated by the fact that a relatively modest $15 billion raw material source, can generate some $150 billion internal country and/or between trading center turnovers generating employment for a few million people. The total midstream (diamond manufacturing and trading) added value may at best come to $6 billion, before the downstream (jewellery manufacturing and retail) adds its added value,” reflects Chaim Even-Zohar.

“Looking just at the employment factor, one can never doubt that the social and welfare contribution of diamonds are a source of ‘good’ in a society that measures value not just in money terms, but rather how society benefits from it. It is really befitting the pipeline that it gets its new ‘home’ in India, the world’s largest diamond manufacturing and trading centre.”