….as it unveils the Suhail Collection 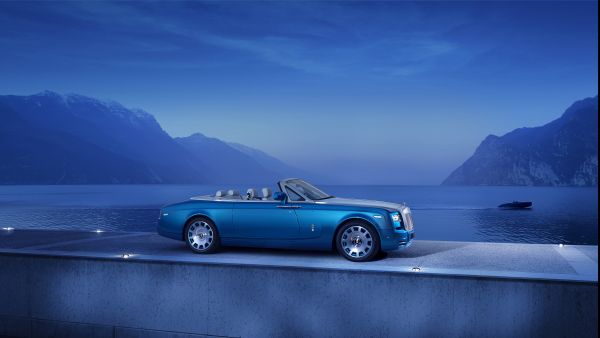 Rolls-Royce Motor Cars is delighted to unveil its first ever Bespoke Collection that encompasses the marque’s entire family of motor cars. The announcement chimes with the culmination of a remarkable year that saw the marque emphatically reaffirm the fact that Bespoke is Rolls-Royce.

The Suhail Collection is the first Collection to be offered on Phantom, Ghost and Wraith models, and takes its inspiration from Suhail, one of the brightest star constellations in the sky. It celebrates the work of the Arabic scientist considered by many as the father of theoretical physics and a great influence on Western scientific thinking.

The unveiling of this very special Collection completes a year that has seen Rolls-Royce’s Bespoke offer reach new heights of popularity, creating numerous beautiful and compelling Collection cars such as Year of the Horse, Pinnacle Travel, Waterspeed, Metropolitan and Maharajah. 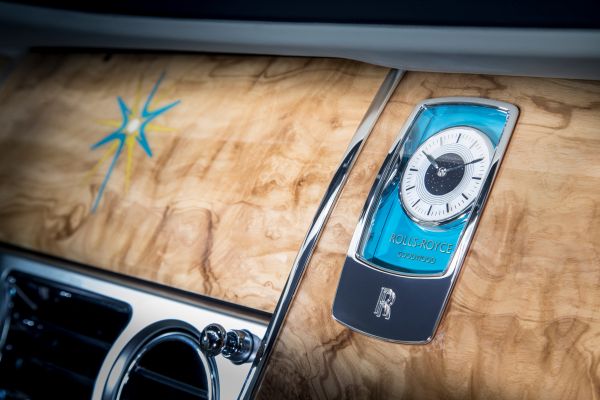 Named after one of the brightest constellations in the sky, Suhail and its light is believed to have inspired the 10th Century Arabic mathematician, astronomer and physicist Ibn al-Haitham, whose best known work is the Book of Optics (Kitab al-Manazir).

British-Iraqi physicist, Jim Al-Khalili, considers al-Haitham to be the “first true scientist” based on his pioneering work on the scientific method. Amongst other achievements, Al-Haitham was the first scientist to realise that light enters the eye rather than leaving it.

His Book of Optics was translated into Latin in the 13th century and has influenced a number of key Western scientific thinkers including Roger Bacon, Leonardo Da Vinci, Galileo Galilei and René Descartes.

“Ibn al-Haitham was a notable pioneer whose scientific achievements represented a turning point in the history of science. We felt the Suhail constellation was the perfect inspiration for a very special Bespoke collection to celebrate his influence on Eastern and Western science,” said Torsten Müller-Ötvös, Chief Executive Officer, Rolls-Royce Motor Cars.

A host of elegantly executed touches have been added to the Rolls-Royce Phantom, Phantom Coupé, Ghost and Wraith to bring the spirit of Suhail to life in this extraordinary collection. The exterior of these astronomy-inspired motor cars sparkle in a unique moonstone pearl colour evoking the colour of the stars at night, whilst a Suhail star emblem completes a Turchese Blue coachline inspired by the colour of the night sky when Suhail is visible.

The interior continues the striking colour scheme by elegantly combining Crem é Light leather with Turchese accents, framed by a Navy Blue instrument panel top and carpets. Suhail star emblems are also worked into the marquetry on the Ash Burr wood fascia, whilst a Starlight Headliner in the Phantom and Wraith models allows the owner their own personal moment of stargazing.

Finally the Bespoke clock, colour matched to the interior, depicts the Suhail Ursa Minor and Major constellation on the clock face.

A year of amazing Bespoke Rolls-Royces

In addition to the Suhail Collection, 2014 has seen several beautiful and compelling Collection cars such as Year of the Horse, Pinnacle Travel, Waterspeed, Metropolitan and Maharajah created by the Bespoke Design Studios at the Home of Rolls-Royce in Goodwood, England.

The Bespoke year began with the announcement in January that Rolls-Royce’s Bespoke team had designed a Majestic Horse Ghost to celebrate the Chinese Year of the Horse.

Marrying the Chinese artistic tradition and appreciation of fine hand-craftsmanship to the very best in contemporary British automotive design, Majestic Horse offered unique interior and exterior features including stitched horses in the headrests and rear seat cushions as well as a painted horse logo on the side and one painted on the wooden dashboard.

April saw the debut of the Pinnacle Travel Phantom at the 2014 Beijing Autoshow. This extraordinary motor car served to showcase the imaginative heights of craftsmanship and design that emanates from Goodwood, seen through the prism of modern luxury travel.

The richness of its main two-tone exterior colour scheme hinted at the luxury awaiting the traveller inside, whilst a unique coach line with an abstract motif of a streamlined train travelling at speed, invited the passenger onboard for a journey of discovery.

A further motif in Smoke Grey thread evoked luxury travel whilst the piece de la resistance was 230 individual pieces of marquetry were painstakingly hand-laid to create a striking motif of a cross-continental train speeding across a landscape with plumes of steam left in its wake. The same motif is echoed on the door cards through 24,633 individual stitches, emphasising the painstaking craftsmanship required to perfectly match the two details.

In May, Rolls-Royce Motor Cars unveiled the Phantom Drophead Coupé Waterspeed Collection, designed to celebrate Sir Malcolm Campbell’s act of setting a new world water-speed record on the nearby Lake Maggiore in 1937.

Echoing the cutting-edge technology employed in the construction of Sir Malcolm Campbell’s Bluebird K3 craft, only the finest contemporary materials were used to furnish Waterspeed. Brushed steel perfectly complemented an exclusively developed ‘Maggiore’ Blue colour scheme whilst hand-crafted Abachi wood inlays evoked the sense of a boat effortlessly gliding through water at pace, whilst exterior coachline and laser etchings inside the car brought Campbell’s ‘Bluebird’ motif back to life. 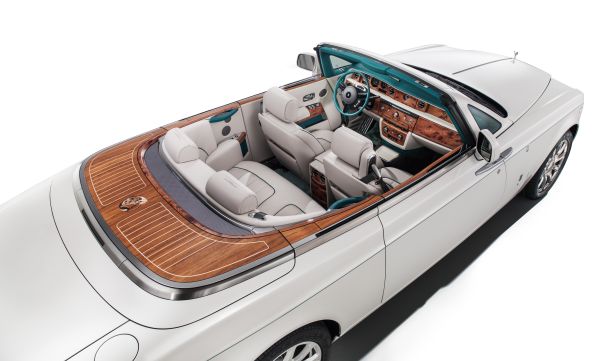 For the first time in Rolls-Royce history the engine was painted the same colour as the exterior of the car, resulting in a visually striking homage to the power behind Campbell’s records, whilst the Phantom Drophead Coupé’s traditional teak decking to the rear made way for brushed steel.

Reference to Campbell’s craft was also made through a new interpretation of Rolls-Royce’s famous ‘power reserve’ dial. As the driver presses on, the dial moves backwards towards a yellow and blue zone, echoing K3 ‘going into the blue’ at maximum engine revolutions.

Direct tribute to the records was paid in the glovebox, with a hand-embroidered panel expressing the records Campbell achieved at Lake Maggiore, Lake Helwel and Coniston Water in K3 and K4.

September’s Salon de l’Automobile in Paris was the appropriate venue for Rolls-Royce Motor Cars next Collection car. Phantom Metropolitan Collection paid homage to the world’s great metropolises through the most complex application of marquetry ever undertaken by Rolls-Royce.

When open, Phantom’s signature picnic tables presented occupants with an elevated view of the city, created through the expert application of 500 individual wood veneer pieces.

Indeed, the process of hand-cutting, colouring, shaping and applying is so complex these unique objects d’art take an expert wood craftsperson several days to complete. On closing the tables, a different perspective of the cityscape was offered – reflecting the view one gets when effortlessly travelling in the rear of a Phantom.

The cityscape theme extended beyond Phantom’s many wood surfaces. A specially developed Aetherius Grey leather colour was created to echo the colour palette of the modern city whilst 6,800 two-tone stitches to the central rear seat flutes depicted an abstract image of a skyscraper.

A specially developed Bespoke clock extended the theme to the front of the car. For the first time in the marque’s history, a rotating bezel expressing 24 of the great cities of the world and their time zones – Paris included – adorned the central console of a Rolls-Royce motor car.

The most recent Bespoke Rolls­Royce, the one­of­a­kind Maharaja Phantom Drophead Coupé was unveiled this November. Inspired by the Golden Age of the Raja, this beautiful model was conceptualised and hand­crafted in honour of India’s affinity with the super­luxury marque.

100 years ago, India’s Princes and Maharajas collectively engaged in what is described as one of the world’s longest relationships with one automobile manufacturer. Over a period of five decades, the Maharajas purchased over 840 unique Rolls­Royce motor cars pushing the maker of the ‘Best Car in the World’ to unprecedented levels of design, engineering and luxury.

Rolls­Royce Motor Cars is recreating that golden age of India’s motoring heritage though a collection of Bespoke vehicles inspired by the Maharajas’ cars.

A host of subtle touches have been added to the Rolls­Royce Phantom Coupé to bring the Golden Age of the Raja alive. The exterior dazzles in a Carrara White colour, with a Peacock emblem, the national bird of India, completing an Emerald Green coachline.

A Deep Green hood retracts to reveal a beautiful deck with a Peacock emblem integrated into the marquetry – a perfect complement to the Peacock detail on the exterior. The interior continues the striking colour theme by elegantly combining Crème Light leather with Emerald Green accents, which is complemented by marquetry inlay on the facia panel top and arm rests.

More elaborate Peacock emblems can be found embroidered into the headrests in Emerald Green and Cobalto Blue, as well as a Peacock feather pattern in Seashell stitching on the side and central armrests. A Bespoke Maharaja Peacock clock complements the interior colours with Cobalto Blue and pure Jade elements.

These limited Collections serve to inspire customers, with record levels of Bespoke demand reported in September 2014. Nearly every Phantom across the globe, 90% of Wraith and 80% of Ghost family motor cars were commissioned by customers with some element of Bespoke design. Bespoke is Rolls-Royce.