… as location for third Australian Showroom 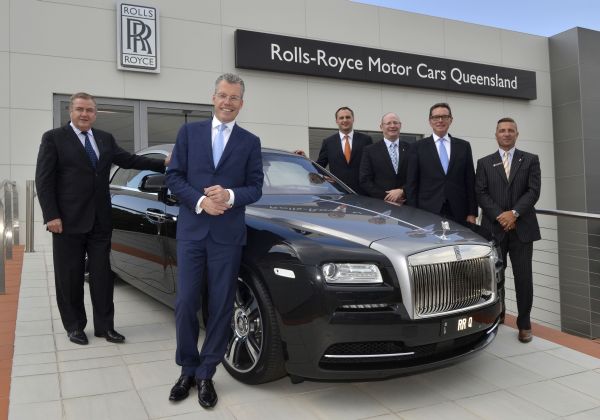 Rolls-Royce Motor Cars’ third showroom in Australia, based in Gold Coast, Queensland, was inaugurated by the marque’s CEO Torsten Müller-Ötvös, who is in the region for a week-long visit.

He was joined at an exclusive evening event to open Rolls-Royce Motor Cars Queensland’s new showroom by Paul Warren, Chief Executive Officer of The Peter Warren Group, the company’s dealer partner in Queensland, plus VIP guests and the who’s who of Gold Coast’s society.

In addition to the inauguration of the 300-square metre facility, VIP guests were treated to the Queensland debut of Rolls-Royce Motor Cars’ newest model, Ghost Series II.

Speaking at the event, Torsten Müller-Ötvös, said, “Australia is a very important market for us with which we share a rich century-long history. Since returning to the market in 2003 as Rolls-Royce Motor Cars we have enjoyed steady growth, and we see strong potential in the Queensland market.

I am confident that our partnership with Sunshine Automotive will be successful, and together we will propel both excellent customer satisfaction and further sustainable growth.”

Paul Warren, Chief Executive Officer, Sunshine Automotive explained, “Today marks a milestone in our operations here in Queensland. Our appointment is testament to our extensive experience and capabilities in the super luxury automobile market. We are committed to delivering every Rolls-Royce client an experience beyond compare.”

The evening event also witnessed the exciting unveiling of Ghost Series II. The model features a discreet styling update with a range of innovative technological, design and engineering features that position it as the pinnacle super-luxury car for today’s exceptionally successful and highly mobile entrepreneur.

Since its launch in 2009, Ghost has become the ultimate symbol of success for leading entrepreneurs across the globe and in Australia. It counts among its clientele, Captains of Industry, entrepreneurs and successful businesspeople who have contributed to the growth and dynamism of Australia’s economy.

Rolls-Royce Motor Cars is based at its Goodwood manufacturing plant in the United Kingdom. The first Phantom was presented to its owner at one minute past midnight on 1 January 2003. The company is expanding ‘the Home of Rolls-Royce’ to help meet increasing global demand for highly personalized, hand-built Ghost and Phantom models. Last year, every car delivered to Australia was bespoke.

The company recently announced that it is on track for a record year in 2014. It is poised to deliver a record of over 4,000 super-luxury motor cars, making 2014 the fifth consecutive record year and the highest in the marque’s history.

This is underlined by the company’s latest sales figures, with Rolls-Royce Motor Cars increasing worldwide sales by 24.3% year-to-date (end October) over the same period in 2013. Sales in Australia are on course for a record year with the brand represented in Sydney, Melbourne Gold Coast and Perth (showroom to open in 2015).

The worldwide success of its new model, Wraith, and growing demand for the company’s unique Bespoke personalization offering has resulted in the company successfully retaining its position at the very pinnacle of the ultra luxury market, maintaining segment leadership for motor cars selling above Euros 200,000 globally (not inclusive of local taxes).

More than 1,500 people are now employed at the Home of Rolls-Royce Motor Cars at Goodwood, England.