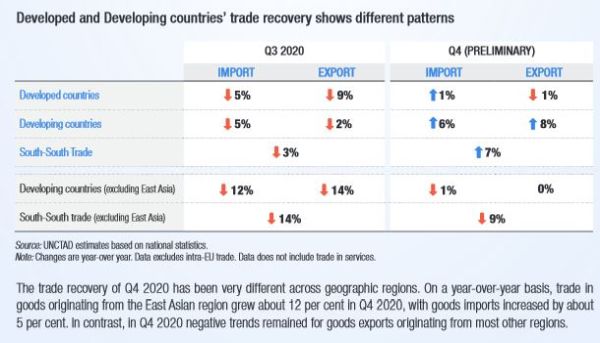 On a year-over-year basis, trade in goods originating from the East Asian region grew about 12 per cent in Q4 2020, with goods imports increased by about 5 per cent. In contrast, in Q4 2020 negative trends remained for goods exports originating from most other regions.

Goods trade has not rebounded for most regions, except East Asia and the Pacific

Source: UNCTAD estimates based on national statistics.
Note: Changes are year-over year. Data excludes intra-EU trade. Data does not include trade in services.

The designations employed and the presentation of material on any map in this work do not imply the expression of any opinion whatsoever on the part of the United Nations concerning the legal status of any country, territory, city or area or of its authorities, or concerning the delimitation of its frontiers or boundaries.