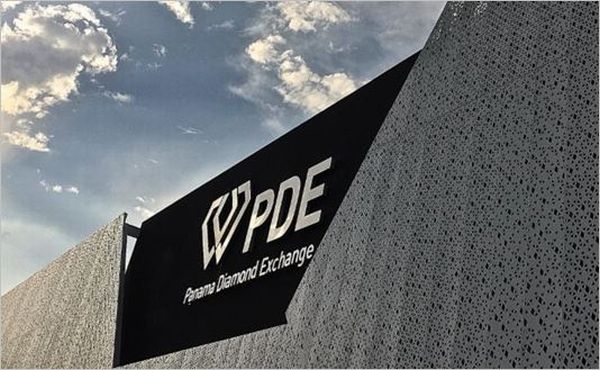 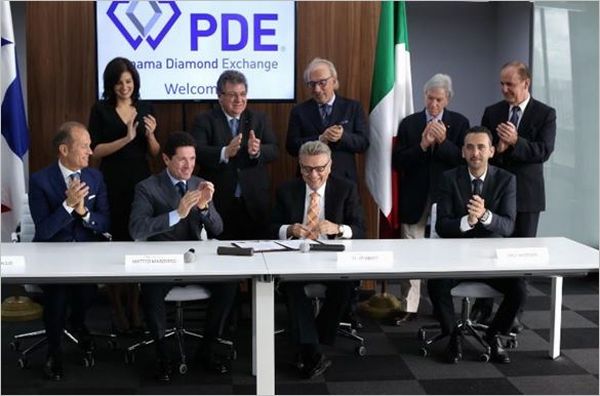 Fiera di Vicenza, the leading Italian jewelry trade fair organizer, and the Panama Diamond Exchange, have agreed to join forces in the organization of events that will promote the trade in gemstones and jewelry in Latin America.

According to the MOU, PDE and Fiera di Vicenza  will formulate a strategic plan and conduct a feasibility study for projects that include trade fairs, symposiums and industry forums, which will take place in Panama and promote the diamond, gemstone and jewelry business in a region that includes Mexico, Central America, South America and the islands of the Caribbean. The joint program will begin in 2015.

The signing ceremony was the first official event to be held in the Phase I building of the Panama Diamond Exchange, which will open for business at the end of the month. Mr. Marzotto was accompanied by Corrado Facco, Managing Director of Fiera di Vicenza, and leading representatives of the Italian jewelry sector, including Dr. Gaetano Cavalieri, President of CIBJO, the World Jewellery Confederation, and Roberto Coin, one of the world’s most prominent brandname jewelry designers and manufacturers. Both Dr. Cavalieri and Mr. Coin are PDE directors.They were joined at the podium by Dr. Luciano Pataro, a PDE director from Panama and Erez Akerman, PDE President.

“The significance of this agreement, being signed in this new facility, cannot be understated,” said Mr. Izhakoff, during the ceremony. “The involvement in PDE’s mission of Fiera di Vicenza, which represents Italian luxury at its finest, emphasizes that we are not just building offices, but rather an industry. Our goal, through the development of the Latin American gemstone and jewelry trade, is to grow the pie for everyone. As a key industry service provider, Fiera di Vicenza’s contribution can be invaluable.”

“When you look from this beautiful new facility out across Panama’s rising skyline, you see the future of Latin America,” said Mr. Marzotto. “We are keen to be part of that future. While we always will be rooted in Italy, Fiera di Vicenza is going international, working with key regional partners, like PDE, to grow and enrich the jewelry business around the world.

We, too, are not just selling physical space  at trade shows, but rather providing the business with relevant and quality content, so that the buyer and the exhibitor’s experiences are enriched, focused and made more efficient and value adding.

We are already doing this in Italy, with our new VICENZAORO The Boutique Show format we are launching this January, and with our new super-show in the United Arab Emirates, VICENZAORO Dubai, which will debut in April, and which is being done in a joint venture with the Dubai World Trade Center.” 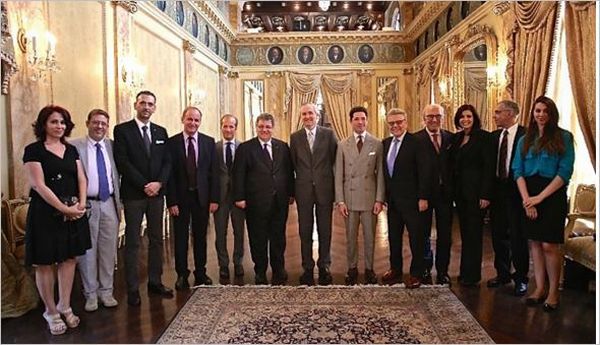 Prior to the signing of the Memorandum of Understanding, the PDE leadership and the Italian visitors were hosted by Panama’s Minister of the Presidency, Álvaro Alemán, at the Presidential Palace in Panama City’s government quarter.

Mr. Alemán, who was accompanied at the meeting by Néstor González, Panama’s Vice Minister of Commerce, emphasized  the government’s strong and ongoing support for the Panama Diamond Exchange, and its program to establish Panama both as the primary gemstone and jewelry trading center in Latin America, and the region’s gateway to the world markets. He warmly welcomed Mr. Marzotto, Mr. Facco and the other Italian visitors, stressed that their involvement in the project will contribute to its success. 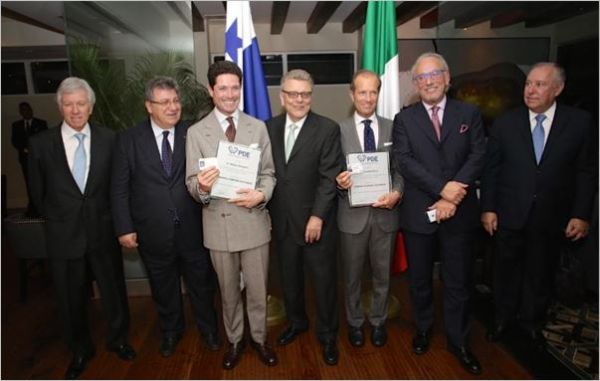 Later, at a packed evening reception attended by PDE members, representatives of Panama’s business community and diplomatic corps, including the Italian ambassador in Panama, Mr. Izhakoff awarded honorary PDE membership to both Mr. Marzotto and Mr. Facco, and presented both of them with personalized official entry tags into the new Panama Gem & Jewellery Center, where the headquarters and trading floor of Latin America’s only recognized diamond exchange are headquartered.

Noting that just several months ago he was honored by Fiera di Vicenza, when he was named a recipient of the prestigious Andrea Palladio International Jewelry Award for lifetime achievement in Corporate Social Responsibility, Mr. Izhakoff expressed his pleasure at being able to reciprocate, noting that the involvement in Panama of organizations like Fiera di Vicenza will contribute to the growth a responsible and ethical gemstone and jewellery trade in Latin America.

Over the coming weeks, companies will be taking up residence in the Phase I building of the Panama Gem & Jewellery Center, which includes 61 offices, vaults and secure transportation facilities, as well as the Panama Diamond Exchange, including its administrative offices and  300 square-meter trading floor.

Construction of the Phase II building will begin in 2015, with a finish date scheduled for 2017.  It includes an iconic office tower, where the offices and trading floor of the Panama Diamond Exchange will be located in the low-rise base of the complex, along with a luxury commercial center, with banks, specialized support services, restaurants and shops, including high-end retail jewelry stores.

The $200 million-Panama Gem & Jewelry Center is the largest and most ambitious development project ever undertaken on behalf of the jewelry and gemstone trades in Latin America. It is being established by Grupo VerdeAzul, one of Panama’s leading property companies, headed by Alberto Vallarino, the country’s former Minister of Economy and Finance.

The entire complex will be located in the Vaguil Free Zone, which was established by an act of the Panamanian parliament for the benefit of the international gem and jewellery trade, and exempts transactions conducted within its area from payments of customs duties and taxes, and corporations registered in the Free Zone from paying company tax. It is projected to directly generate 3,000 jobs in the Panama and generate billions of U.S. dollars for the local economy.

The Panama Diamond Exchange (PDE) is the first and only diamond bourse in the entire region of Latin America, including South America, Central America, Mexico and the Caribbean. It will anchor the Panama Gem & Jewelry Center, which is now under construction and is designed to serve as the primary Latin American trading center and international gateway to and from one of the world jewelry industry’s most exciting growth markets.