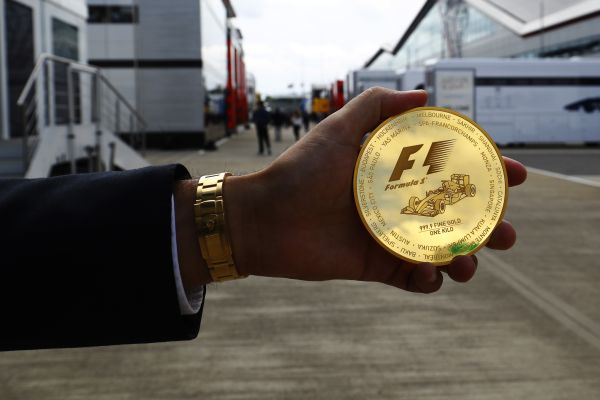 The collection includes a one-quarter ounce special edition British Grand Prix gold coin, a two-and-a-half ounce gold and silver coin, respectively, as well as a spectacular one kilogram gold coin, one of only 15 minted this year.

The limited edition coins, officially launched last month, were introduced at the famous Silverstone circuit to the Formula 1 Paddock via a series of media engagements and a showcase display in the prestigious F1 Paddock Club.

Celebrating the rich history and status of the world’s most exciting and glamorous sporting series, the coins come in a variety of high-end designs and collectible packaging, marking them out as timeless collectors’ items for any true Formula 1 fan.

To mark the occasion, the one-quarter ounce gold coin has been given a special British Grand Prix design to commemorate one of the most historic and anticipated races on the Formula 1 calendar.

This weekend also marks the first time that the one kilogram F1 gold coin – of which only 15 have been minted in 2016 – has been presented to the world.

With a diameter of 100mm and depth of 6.6mm, this extraordinary coin features the official F1 logo, a Formula 1 2016 car and the names of every race on this year’s F1 calendar. It is a truly spectacular achievement in craftsmanship and design.

In addition, the two-and-a-half ounce gold and silver coins also list each race on the 2016 Formula One calendar in concentric circles around the coin’s edge with the official Formula One logo shown in the center.

Finally, the obverse side of every coin features Ian Rank-Broadley’s portrait of Queen Elizabeth II together with the legal tender value of the coin.

“We have been overwhelmed at the positive response these coins have received in the F1 Paddock today,” said Marin Aleksov, Chief Executive Officer of LA-based Rosland Capital LLC.

“To be able to come to Silverstone for the British Grand Prix – a circuit and race that count as the true heart of the sport for so many F1 fans – and present this unique collection to the sport’s inner circle is a remarkable honour.

We feel these beautifully crafted coins reflect everything that makes F1 so great – stylish, innovative and unforgettable.

They are not only a memorable way to celebrate the magic of F1 but are also a unique keepsake for coin collectors and F1 fans alike.”

Created in association with the global license-holders, UK-based Stunt & Co. Ltd., the limited edition, legal tender proof coin collection will be available from Rosland Capital Group in the United States and United Kingdom.