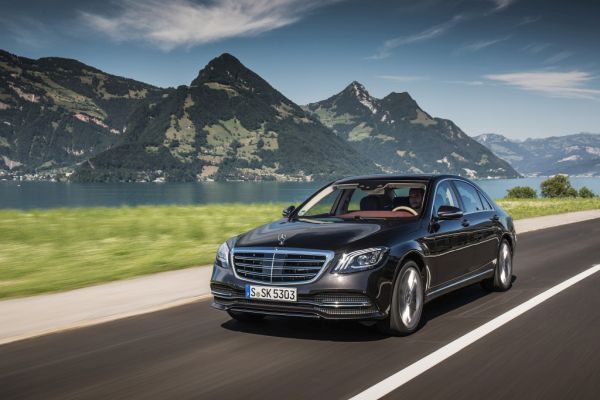 Thanks to double-digit growth (+10.7%), more vehicles were delivered to customers in the first eleven months (2,095,810 units) than in the entire previous year.

The S-Class Saloon posted an 18.5% increase in unit sales in November.

More than half a million units sold in China since the beginning of the year: The record series in sales continues (+27.3%).

Mercedes-Benz delivered 195,698 vehicles to its customers in November (+7.2%), thus achieving the 57th record month in succession. In the first eleven months of the year, 2,095,810 units were sold.

This represents not only the best-ever figure for the period of January to November, but also growth of 10.7% in unit sales. Last month, Mercedes-Benz was the premium brand with the most new registrations in markets including Germany, France, Italy, Austria, Portugal, Taiwan, USA, Canada, and Mexico.

“Mercedes-Benz passed the two-million mark in November, already surpassing its unit sales for the entire previous year. We are going full speed ahead for our customers – not only with the best products, but also in sales and service.

And this has already been rewarded with the most successful sales year in our history,” stated Britta Seeger, Member of the Board of Management of Daimler AG responsible for Mercedes-Benz Cars Marketing & Sales.

In Europe, unit sales in November rose to a new sales record. A total of 79,942 customers received their new car with the three-pointed star (+1.5%). Since the beginning of the year, 879,878 vehicles were delivered – more than ever before in that period (+7.3%).

Of that total, 281,946 units were sold in Germany (+5.2%). New sales records were set for both November and the first eleven months in Great Britain, France, Spain, Belgium, Switzerland, Sweden, Poland, Austria and Portugal.

China posted record figures for November and the eleven-month period: 50,813 customers decided on a new Mercedes-Benz last month (+22.2%) and 539,728 in the period January to November (+27.3%). More vehicles were sold than ever before in the first eleven months of a year also in South Korea, Japan, Australia, Taiwan, India, Thailand and Malaysia.

In the NAFTA region, unit sales in November surpassed the high prior-year figure and 36,505 customers were delighted to receive their new Mercedes-Benz (+3.8%). In the USA, 30,838 customers decided in favor of a car with the three-pointed star in November (+1.6%).

The E-Class Saloon and Estate are as popular as ever. The strong sales of the prior-year month were surpassed by 8.2% and a new record was set for a November (29,110 units). Since the beginning of the year, unit sales were 46.0% higher than in that period of 2016.

Particularly strong demand for the long-wheelbase version of the E-Class Saloon meant that twice as many units of that model were sold as in the first eleven months of the previous year.

The new S-Class Saloon, which has been on the market in the United States and China since September, posted growth of 18.5% last month. Growth in unit sales of that model in Germany and the United States was even higher.

In South Korea, where saloon cars are especially popular, more S-Class cars were sold last month than ever before in a November.

The SUVs from Mercedes-Benz set new records for the month of November (73,418 units) as well as for the first eleven months (731,626) – not only worldwide, but also in each of the three core regions of Europe, Asia-Pacific and NAFTA.

Sales growth of 19.8% in November was primarily driven by the GLC, GLA, GLC Coupé and GLS, each of which posted new best-ever figures. 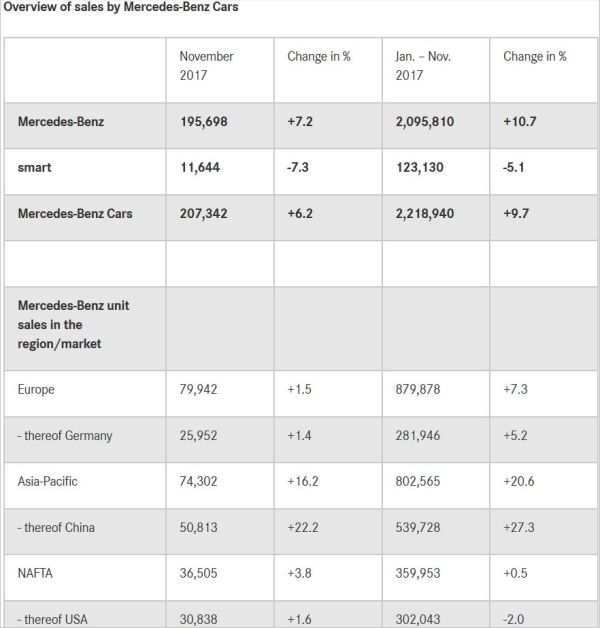 More than 11,500 smart fortwo and smart forfour cars were delivered to customers in November. Demand for the two-door and four-door smart models rose last month in the two largest markets for the urban microcar, Germany and Italy.

In Belgium and the Netherlands, smart achieved a particularly high increase in sales. In the first eleven months of this year, 123,130 units were sold worldwide, and more smart cars were handed over to customers in China than ever before in that period of a year.