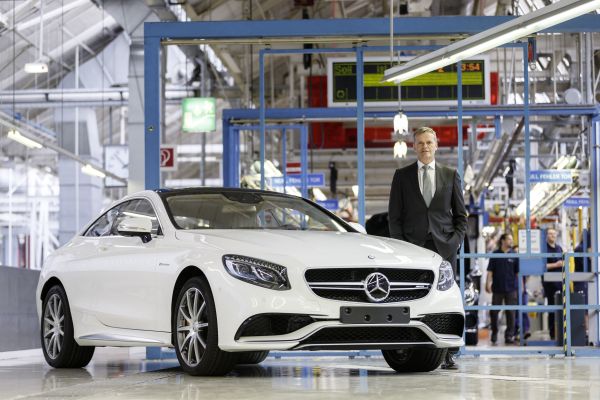 “We want to continue to grow and will significantly increase our production capacities in the coming years,” said Markus Schäfer, Member of the Divisional Board of Mercedes-Benz Cars, Production and Supply Chain Management.

Mercedes-Benz is realigning its global passenger cars manufacturing activities and is strengthening its German passenger cars locations with investments worth billions of euros. “We want to continue to grow and will significantly increase our production capacities in the coming years.

At the same time we want to permanently and sustainably strengthen our competitiveness with a high-performance organization,” said Markus Schäfer, Member of the Divisional Board of Mercedes-Benz Cars, Production and Supply Chain Management, during a media event at the Mercedes-Benz Sindelfingen plant.

This year alone, Mercedes-Benz is managing 18 vehicle ramp-ups at eight locations worldwide, among them the start of production of the new C-Class sedan on four continents. Until 2020, Mercedes-Benz will additionally introduce 12 models which do not have a predecessor.

As well as stepping up its international activities, Mercedes-Benz is strengthening it German plants with investments of more than three billion euros this year. At the Sindelfingen plant, more than one billion euros are invested primarily for future products. Another billion euros go to the Untertürkheim core plant, amongst others for the expansion of engine production.

The Bremen plant’s capacities will be increased with around 750 million euros. Further investment also goes to the Rastatt compact car plant, where the fully-electric B-Class electric drive has been seamlessly integrated into series production.

The new manufacturing organization Mercedes-Benz Operations (MO) is based on global production networks and centralized responsibility for logistics and quality. “Under our previous production structure, the individual plants operated largely autonomously. Now, manufacturing will be organized according to product architectures, independent of individual locations,” explained Schäfer.

The MRA production network (S-, E-, C-Class) is led by Andreas Kellermann, who was previously head of the Bremen plant. Michael Göbel is now in charge of global compact car production (A-, B-Class, CLA, GLA and in the future CLA Shooting brake), having previously overseen roadster production in Bremen.

Production of SUVs (M-, R-, GL-, and G-Class) and sports cars (SL, SLK) is the responsibility of Jason Hoff, who also retains his existing role as President and CEO of Mercedes-Benz U.S. plant in Tuscaloosa/Alabama (MBUSI). Peter Schabert, who has been responsible for global powertrain production since 2010, will continue in this position unchanged.

Each vehicle and powertrain architecture will draw on a system of modules and components. The new C-Class is the first model series to be built entirely in accordance with this principle. The C-Class is Mercedes-Benz’s highest-volume model series and went into production on four continents within just six months earlier this year: Bremen came first in February, followed by the East London plant (South Africa) in May, the Tuscaloosa plant (USA) in June, and the BBAC plant in Beijing (China) in July.

Within the global production network, Bremen is the lead plant and manages all aspects of C-Class production, from the tooling strategy and quality assurance to the training of colleagues from other sites worldwide. The company is thereby ensuring that the highest standards are met at all production sites right from the outset. Around 500 employees from plants outside Germany have received intensive training so that, as multipliers, they can pass on their knowledge within their home plants.

“Our German passenger car and powertrain plants form the backbone of our global production network. The achievements of the teams in all four plants are second to none: they have done an outstanding job in launching the C-Class at four sites in such a short space of time,” stated Schäfer.

Making sure that every production facility delivers the high quality that is synonymous with the Mercedes-Benz brand is just one aspect of the redefined quality management function.

“Our quality remit covers every area of Mercedes-Benz Cars, from product development to customers,” said Schäfer. He believes that providing innovative manufacturing processes is also a part of quality management: “It means our designers and developers are able to launch exceptional vehicles that are equipped with leading technologies.”

Another key factor in the new organization is centralized supply chain management, in which all stages of the supply chain must be seamlessly integrated, from the supplier right through to the end customer. “We still face great challenges in this field, at the same time there is also huge potential for reducing costs and increasing efficiency,” explained Schäfer.

Global production networks bring Mercedes-Benz closer to the different markets and customers and enable it to respond more quickly to changes in demand, because production can be adjusted in individual plants. At the same time, manufacturing in other currency areas enable exchange rate volatility to be evened out.

“Given the expanding range of models, steadily increasing unit figures, and greater complexity than ever before, we have to become significantly more flexible,” said Schäfer.

This includes having different variants on the same assembly line, factory equipment being used for several vehicle generations, and working hours that can be varied depending on demand. By standardizing and modularizing its plants, Mercedes-Benz intends to contain the level of capital expenditure needed and reduce fixed costs. “It is essential that we achieve continuous improvement in all disciplines and raise our productivity,” added Schäfer.

The expansion of alliances, establishment of joint ventures, and use of capacity at contract manufacturers play an important role in Mercedes-Benz’s growth strategy. At the end of June, Daimler announced that it was setting up a production joint venture with the Renault-Nissan alliance, stepping up their existing cooperation. The partners intend to build a new generation of compact cars at a new factory in Aguascalientes, Mexico, which will have a total annual production capacity of 300,000 units.

Schäfer focuses on transparency and a collaborative working relationship across all hierarchy levels, both in the company as a whole and in his own organization: “A high-performance organization depends on the motivation of all employees. The human factor makes the difference.”

Regarding the outlook for the German plants, Schäfer explained: “We are continuing to invest in Germany and thereby safeguard jobs. At the same time, each site needs to be internationally competitive in its own right.” The most recent example is the Mercedes-Benz Sindelfingen plant, where Mercedes-Benz negotiated a package with the works council at the end of July: Along with investments totalling 1.5 billion euros, it also includes necessary cost optimization measures, ensuring the site’s future viability.