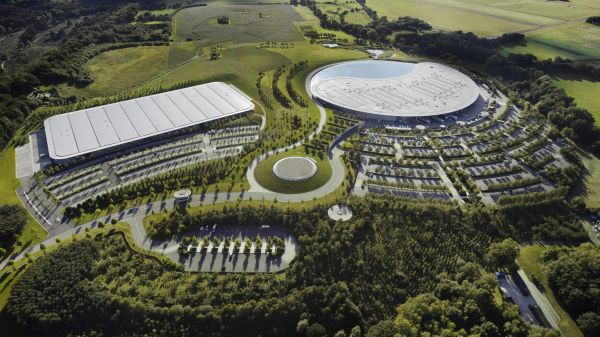 – third year of profitability, increases in research and development investment and new shareholding

Investment in Research and Development increases to nearly 30% of turnover.

Employee numbers increase by 16% to manage ongoing development and demand.

McLaren Automotive welcomes a new investment and shareholder as a sign of future confidence.

Track22 business plan points to successful future as an independent manufacturer of two-seater sports and supercars.

McLaren Automotive, the British manufacturer of luxury handcrafted sports and supercars, has celebrated the fifth anniversary of the first car rolling off the production line with another record-breaking year.

Operating profits increased to £23.5M – the company’s third successive year of profitability – from revenues of £450.6M, with revenue projected to increase by 50% over the next two years and double by the end of 2022 – an unprecedented performance in the early years of a car company.

2015 also marked the fifth successive year of increasing global car sales to 1,654 cars, supported by the launch of no less than five new models.

2015 was another year of investment for the future of McLaren Automotive with a record amount of £123.9M spent on Research and Development.

Similar levels of investment in previous years spawned, in 2015, a total of five new cars and the establishment of the three-tier product family – Sports Series, Super Series and Ultimate Series.

The Chairman of McKal Ltd is well-known to McLaren Automotive as an owner of two examples of the McLaren P1TM as well as a frequent visitor to McLaren track events.

AN UNPRECEDENTED YEAR OF PRODUCT LAUNCHES

With a total of five new cars launched, and the unveiling of the Sports Series, Super Series and Ultimate Series product families, 2015 was an unprecedented year of growth for McLaren Automotive.

It was also a transition year with the final McLaren P1TM produced at the same time as the start of production of the new Sports Series models.

The Geneva Motorshow in March 2015 saw the revival of the famous Long Tail name from McLaren’s illustrious motor racing history with the introduction of the limited-volume McLaren 675LT Coupé in the Super Series.

The Coupé was joined in December by a Spider variant. Like the Coupé, the Spider is limited to 500 cars and was sold out in just two weeks.

Following on from the iconic McLaren P1TM, the Geneva Motorshow in March 2015 also saw the introduction of the track-only McLaren P1TM GTR.

Conceived in direct response to feedback from existing McLaren P1TM owners, the McLaren P1TM GTR was designed as the ultimate track car.

Almost all of the limited run of McLaren P1TM GTR cars were built in 2015, with a handful finishing construction in early 2016.

The reveal of the new Sports Series at the New York Autoshow in April 2015 was a pivotal moment in the short history of McLaren Automotive.

Charged with more than doubling the company’s global sales volume in the coming years, the McLaren 570S Coupé was launched in New York and was closely followed by the McLaren 540C Coupé at the Shanghai Autoshow in April.

GROWTH IN RETAILER NETWORK AND EMPLOYMENT

Twelve new retailers opened in 2015 covering important territories such as Seoul and Houston.

Employment at McLaren Automotive also kept pace with sales developments with a total of 1,492 people employed at the end of 2015, an increase of 16% on the 1,283 working at the end of the previous year.

The 1,492 headcount increased again substantially to about 1,750 in the early months of 2016 with the introduction of a second shift at the McLaren Production Centre and a further 250 new roles being created in the Production, Quality and Logistics departments.

The second shift started in February 2016 with the new roles adding approximately 40 percent to the existing headcount in the Production Centre, and will take production rates from the previous 10 cars per day up to 20 cars per day by mid-2016.

TRACK22 DRIVES TOWARDS A SUCCESSFUL FUTURE

Looking forwards, McLaren Automotive has revealed details of its Track22 Business Plan, taking it through to 2022.

With a continued focus on building the world’s finest two-seater sports and super cars, the business plan reiterates a commitment to its industry-leading 20-25 percent of turnover invested in Research and Development for future products and technology.

Over the six-year Business Plan period, this represents an investment of £1B and will lead to the launch of 15 all-new cars or derivatives.

Of these cars, at least 50 percent will feature hybrid technology by the end of the Business Plan period and the company is also in the early prototype stages of the development of a fully-electric powertrain to evaluate its possible use in a future generation of an Ultimate Series car.

The launch of the Sports Series opens McLaren up to an entirely new audience and will be pivotal in developing our sales volumes from the 2015 levels of 1,600 to nearly triple that number by 2020.

For this to be achievable, we need to remain profitable but also continue to invest in our future product portfolio. In 2015, this amounted to £124M, nearly 30% of revenues.

This level of commitment to investing in future products is core to our business strategy, as highlighted by the recently-announced Track22 business plan that commits us to investing £1B in research and development, delivering no less than 15 all-new cars or derivatives by 2022.’