“Israel is the best place to do business in diamonds” 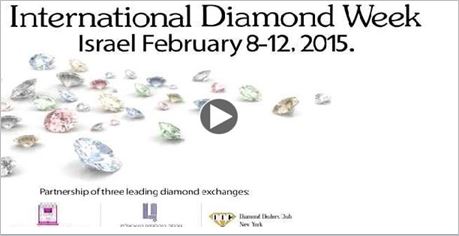 The Israel Diamond Exchange (IDE) released a taped invitation to the International Diamond Week in Israel (February 8-12, 2015) that within hours after it was posted online, received a great number of viewings, and it is therefore expected to go viral in the next few days.

“We are determined to make the winter edition of the International Diamond Week in Israel the most successful of the past three years,” IDE President Shmuel Schnitzer said, speaking from Delhi, India, where he joined a meeting of the World Diamond Council and will be participating in the inaugural World Diamond Conference in India.

“It is the ideal platform for international diamond traders and buyers to meet each other and develop their businesses. Already, the IDE is partnering with the Diamond Dealers Club of New York and the Antwerp Diamond Bourse (Beurs voor Diamanthandel).

Whilst in India, I will be speaking to colleagues from other bourses affiliated to the World Federation of Diamond Bourses (WFDB), inviting  them to join us and bring delegations of their own members to Israel in February,” Schnitzer stated.

Ernest Blom, President of the World Federation of Diamond Bourses (WFDB) who will be a guest of honor in February, said he was looking forward to attend the event. “As president of the WFDB, I look very positively at initiatives like these.

We are constantly and consistently looking to strengthen the ties between the 30,000-plus bourse members worldwide and the 2015 Winter edition of the International Diamond Week in Israel fits right into those endeavors,” Blom said.

Both exchanges will be represented by dozens of their members on the IDE trading floor in February.