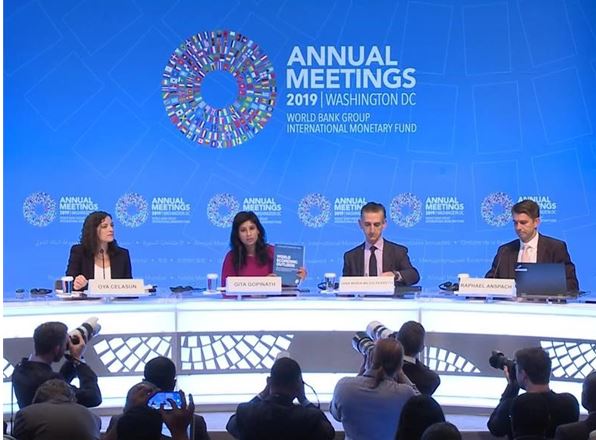 “The global outlook remains precarious, with a synchronized slowdown and an uncertain recovery. At 3 percent growth, there is no room for policy mistakes and an urgent need for policymakers to support growth.

The global trading system needs to be improved, not abandoned. And countries need to work together because multilateralism remains the only solution to tackling major issues such as risks from climate change, cybersecurity risks, tax avoidance and tax evasion, and the opportunities and challenges of emerging financial technologies,” said the Fund’s chief economist Gita Gopinath at the launch of the WEO Tuesday in Washington.

She said that monetary policy has played a significant role in supporting growth and will remain an important tool.

“To fend off other risks to growth and to raise potential output, economic policy should support activity in a more balanced manner. Monetary policy cannot be the only game in town. It should be coupled with fiscal support, where fiscal space is available, and fiscal policy is already not too expansionary.”

Gopinath was asked the likely effect of removing all the tariffs imposed by U.S. and China in their trade dispute.

“The answer to your question, of course, depends on the specifics of a trade deal. But based on what we have right now, if all the tariffs were to come off, the ones that were put in 2018 and 2019, including those announced, we would be talking about a boost to the level of global GDP by 0.8 percent by the end of 2020.”