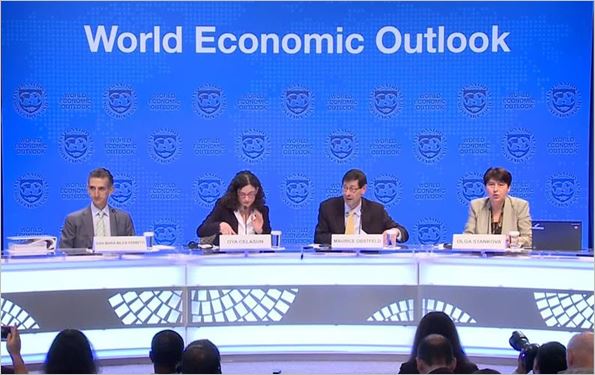 But the recovery is not complete, cautioned Maury Obstfeld, Director of Research at the IMF. He urged policymakers to take advantage of stronger economic conditions to adopt policies that will support growth and raise economic resilience in the future.

“If the strength of the current upswing makes the moment ideal for domestic reforms, its breadth makes multi-lateral cooperation opportune. Policymakers should act while the window of opportunity is open,” said Obstfeld.

The report pointed to strength in the U.S. economy but also cited some uncertainties underlying the projections such as fiscal policy on infrastructure spending and the Trump administration’s tax reform agenda. Obstfeld said the impact of proposed tax reform in the U.S. remains unclear, since many details are yet to be settled on.

In general, given where the U.S. is, in terms of its overall debt level and the off-the-balance-sheet obligations going out into the future as population ages, we feel that whatever the tax reform plan looks like, it should not increase the deficit. Over the medium term, as our article IV advice made clear, tax reform should be revenue enhancing,” said Obstfeld.

Obstfeld said that markets seem to be taking into account strong growth and low interest rates.

“So, our concern is simply that if interest rates were to rise faster than expected or growth outcomes not validate these high asset prices, there could be abrupt repricing that could be disruptive.”

The IMF pointed to solid growth in India and China, where Obstfeld said leaders should keep their focus on tamping down excessive debt levels.

“Our advice for China has been to curb excessive debt growth, excessive credit expansion, put state-owned firms on a basis of hard budget constraints so that they don’t borrow too much,” he said.

“For this year, there were two headwinds. Number one, the implementation of the GST itself, particularly in July and August had some disruptive effects, which we believe are passing and you can see that our forecast for next year is quite high at I think 7.4%.

The other headwind came from the demonetization, which led for a time to temporary cash shortages. These have now been overcome. So, the downgrade for this year looks like a blip, I should say, in a much more positive longer term picture.”