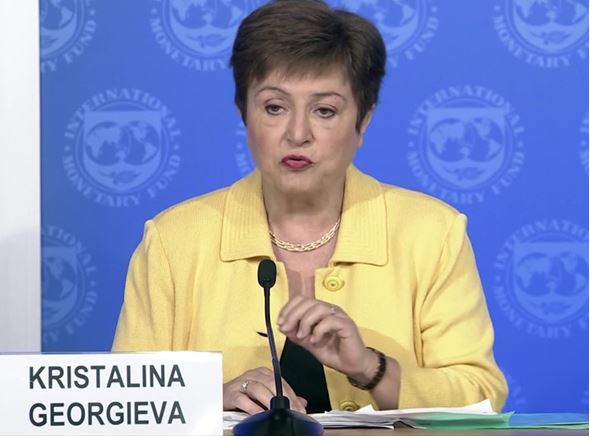 Today the IMF and World Bank Group announced additional measures taken to curtail the impact of the corona virus on the world’s economy and health. At a news conference in Washington, DC Kristalina Georgieva, IMF Managing Director, emphasized the necessity for immediate coordinated action.

The IMF and World Bank have announced the immediate availability of over $60 billion in resources to member states. For its part the IMF has $10 billion on hand to help low income countries, with an additional $40 billion for others.

“We know the disease is spreading quickly with over one third of our membership affected directly. This is no longer a regional issue. It is a global problem calling for a global response.”

It is too soon to measure the exact economic cost from the outbreak of coronavirus strain COVID-19 but it will negatively impact the world’s economy, said Georgieva.

“Global growth in 2020 will dip below its last year’s levels. But how far it will fall and how long the impact would be is still difficult to predict.”

The IMF is looking at all the data available and hopes to have a more concrete outlook of the ultimate impact when it publishes the next World Economic Outlook report in April.

The World Bank Group aims to help developing countries which are particularly vulnerable to the corona virus outbreak with additional packages and measures, said David Malpass, President of the World Bank Group.

“It’s a $12 billion package of which $ 6 billion dollars is IBRD and IDA, and that enables and allows special protection for poor countries. And then there’s also $6 billion Dollar from the International Finance Corporation. That’s critical because it’s private sector financing, it’s fast acting and it takes the form of trade finance and working capital finance, which are some of the most needed services that can be provided during this crisis.”

Malpass emphasized the need for short-term financing during the crisis. “t’s important that the fiscal and monetary stimulus not shift resources away from working capital.”

Although Africa has been largely spared by the spread of COVID-19 so far, the IMF is prepared to help the most vulnerable countries in the region, Georgieva assured.

“We do have up to $10 billion dollars available for low income countries to tap in with zero interest rates. And obviously we would prioritize countries, especially countries in Africa, that have already been faced with difficulties.”

Georgieva stressed that the global outbreak of COVID-19 warrants immediate health and economic responses to mitigate the impact on people and the world economy.

“What is hugely important today is to focus on building a bridge between where we are and that time when we would see a recovery to make sure that the impact, meanwhile, is softened first and foremost on people and also, of course, on businesses and the economy.”