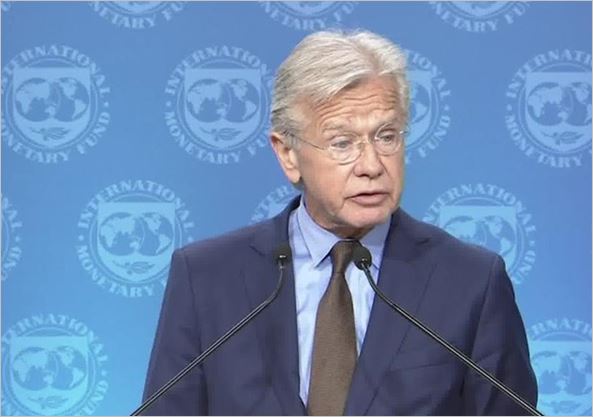 The IMF supports maintaining subsidies and economic measures that help the poor in Tunisia, while at the same time supporting economic reforms to boost growth and employment spokesman Gerry Rice told reporters Thursday (January 18) in Washington.

The Fund supports measures by Tunisia’s government to reform its tax structure to reduce evasion and boost revenue for social spending and investment.

“On the issue of Tunisia and as I mentioned, the recent social unrest that we’ve seen is that we recognize, of course, the frustration of the Tunisian people whose economic aspirations remain unfulfilled,” Rice told reporters.

The IMF recommends leaving basic food subsidies in place and carving exemptions for bread, milk and other staples.

Rice rejected much criticism of the IMF as outdated, saying the design of policy measures must consider the impact on the Tunisian economy and on the poor.

“Speaking for the IMF, we do not want austerity. We do want well-designed, well-implemented, socially balanced reforms,” said Rice.

When asked about the outlook for global growth ahead of the World Economic Forum meeting in Davos next week, Rice said he did not want to ‘scoop’ the important new report coming out next Monday.

The IMF will launch its update to the World Economic Outlook for the first time at the WEF in Davos Monday January 22 at 1400 GMT.

But he did say that IMF Managing Director Christine Lagarde and other top management says that the world is experiencing a broad cyclical upswing, and a period where there is fiscal space to take needed reforms.

“We are seeing a broad based cyclical upswing and let’s use the opportunity of that upswing, of that ‘sunshine’ if you like to make the policy reforms that are needed in so many countries,” said Rice.

Embargoed copies of the report will be available to registered news outlets ahead of the news conference which will be web-streamed live.

And the IMF is pleased that Russia has emerged from recession but the Fund has some policy recommendations to boost economic growth further, Rice told reporters.

“To accelerate this pace of growth, we believe Russia needs in addition to the steady implementation of the fiscal rule and inflation targeting regime already in place but Russia should tackle the structural shortcomings that we’ve identified in the Article IV process and so on, you know, including its detailed a bit more there but improving the investment climate for example, increasing investment in infrastructure, social and economic.”