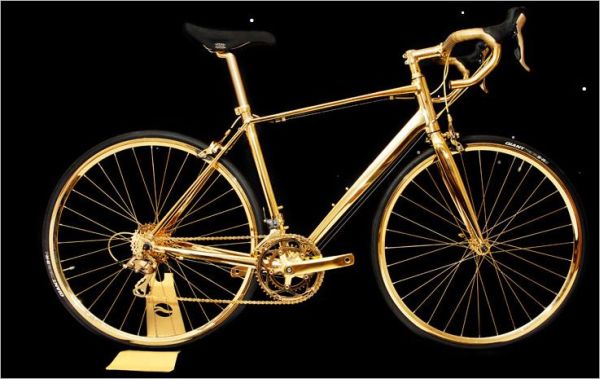 Sir Bradley Wiggins may have set the gold standard for British cycling with his Tour de France win and Olympic Games medal success in recent times, but a luxury gifts company has gone one mile further by creating a 24k gold road bike.

The 24k gold customised bike, which Goldgenie’s team of in-house artisans recently completed embellishing, takes this mode of transport to another level altogether.

This golden set of wheels is a unique creation; a true work of art, as well as a beautifully contoured racing bike that is designed to be admired.  The mobile golden masterpiece, to be adorned with diamonds, is available from £250,000.  The designers at Goldgenie are currently developing more pieces that clients can bespoke to their hearts’ desires from a selection of different finishes on the saddle and handlebars, including exotic skins and fine leathers.

Goldgenie’s specialists have meticulously applied a lustrous layer of 24k gold to the entire structure, from the tip of the drop handlebars to the wheel stays, and every other part in between, including every ridge of the gear chain.

The gleaming gold model is offset with sophisticated accents in black in a limited edition soft San Marco suede saddle and SR4 racing tyres. Striking to look at, the bike is even more beautiful when in fluid motion, as the spinning spokes catch the sunlight and ripples along the golden frame.

Company Director Frank Fernando says “This men’s bike is not only a work of art to admire, but also to enjoy riding if you dare and are brave enough to face the stares of astonishment. The set-up and design is that of a high-end racing bike and while it may not reach the speed of light, the artisans at Goldgenie believe in catching the light as you travel!”

This two-wheeled marvel supplied by British company Giant is the first in a range of items to get the gold treatment at Goldgenie.

The company started out in 1995, gold plating upmarket car badges, but after appearing on the BBC entrepreneur TV show, Dragon’s Den and attracting further investment, Goldgenie pioneered the art of gold-plating an iPhone and have expanded its online gold plating service to include a range of embellished mobile phones, such as the Gold iPhone 6, HTC and Blackberry and a range of luxury gifts.

Boasting an international reputation, and a host of celebrity clients, including Jamie Foxx, The Beckhams and Elton John, to name a few.

Goldgenie is always forging ahead with new innovations and according to Fernando, the luxury gold bike is just the beginning of the company’s two-wheeled journey. More bikes that can be custom-made to meet the customers’ wishes are planned for the future. In the meantime, this unique gold racing bike is available to order now, making a once-in-a lifetime gift for someone truly special.