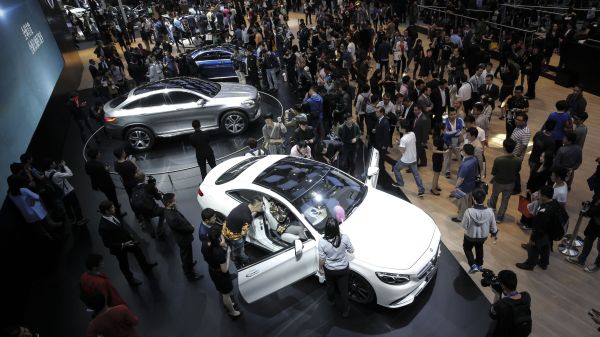 – Number of concluded contracts as of November has doubled

For Daimler Financial Services in China, 2014 has been a record-setting year. The company concluded more than twice as many financing and leasing contracts as it did in 2013 and received a series of awards.

Automobile customers in China increasingly relied on leasing and financing options in 2014. Between January and November, the Daimler Financial Services national subsidiary in China, Mercedes-Benz Auto Finance Ltd., concluded more than twice as many financing contracts as it had during the same period of 2013. Today more than 150,000 vehicles valued at €4.1 billion are driving on China’s roads thanks to contracts with Daimler Financial Services.

The attractiveness of Mercedes-Benz financial products has now been highlighted by several awards presented by the renowned Chinese financial magazine Moneyweek (Licai zhoubao). The magazine judged the financial product “Agility”, which has been available in China since April 2014, as the best of its kind in the country. In addition, the Mercedes-Benz College Graduate Financing Program, which is directed at students and college graduates, was honored for the second time. And finally, Moneyweek, which is part of the Nanfang Media Group, also honored the Mercedes-Benz Leasing Company, which is part of Daimler Financial Services, as the country’s best leasing company. The awards were presented on December 17 at the China Auto Finance Annual Conference 2014 in the megacity of Guangzhou.

“The Chinese market is becoming much more significant in the area of financing and leasing too — and as a result, we’re even happier that we are setting the benchmarks there as well,” said the Chairman of the Board of Management of Daimler Financial Services AG, Klaus Entenmann. Alex Mallmann, Managing Director of Mercedes-Benz Auto Finance Ltd., stated: „Especially younger customers in China are finding leasing and financing attractive. With these products, we see further growth potential in the market.“

The award-winning financial product „Agility” offers Chinese auto buyers the greatest possible flexibility. When the contract ends after two or three years, the customer has three options. He can either purchase the vehicle, return it, or exchange it for a new model. The monthly installments can be flexibly arranged, depending on the duration of the contract and the kilometers driven per year. Agility previously received an award from the Auto Business Review magazine as China’s best auto finance product 2014.

The Mercedes-Benz College Graduate Financing Program, which also won an award, has been running since July 2013. It offers financing conditions that are specially tailored to meet the needs of students and college graduates. At the beginning of the program, the participants could finance the purchase of a smart brand vehicle. Because of the positive response to the program, it was extended during 2014 to more than 800 universities and the A-Class and B-Class models of the Mercedes-Benz brand were added to the vehicles on offer.

Moreover, the jury honored the Mercedes-Benz Leasing Company as the country’s best leasing provider. This decision was based on factors including the company’s excellent reputation and the high level of satisfaction reported by its customers. Mercedes-Benz Leasing Company is the first premium automotive financial services brand to provide its own leasing solutions to both commercial and private customers in China.