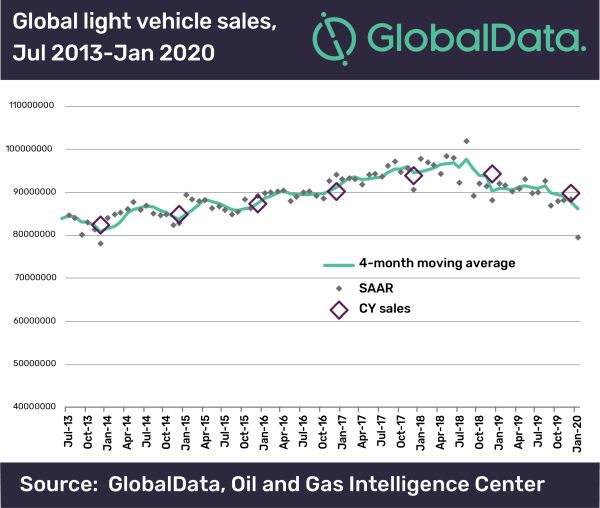 Global light vehicle sales figures from the first month of 2020 should make for alarming reading. Just 6.2 million were sold in January, – the lowest monthly figure since January 2012, which saw 5.9 million units sold, according to GlobalData, a leading data and analytics company.

Driving the drop in sales was the emergence in December 2019 of the coronavirus (COVID-19) in Wuhan, China. The disease has spread rapidly and has already infected more than 80,000 people and caused at least 2,800 deaths worldwide.

To avoid becoming infected, consumers in China and other exposed regions have employed strict outbreak-control measures, with many barricading themselves at home until the danger subsides. This has created a knock-on effect for both vehicle sales and production, with dealerships devoid of customers and factories at a standstill with no one to operate them.

Mike Vousden, Automotive Analyst at GlobalData, comments: “While the drop in January vehicle sales on a global scale is alarming, sinking 13.9% compared with the same month in 2019, it is positively disastrous in China itself. Sales in the world’s single largest vehicle market sank 33.1% compared with January 2019 to just 1.66 million units. Adding insult to injury is the fact that January 2019’s figure was already 8% down on the same month in 2018, following a decade-long period of strong increases.”

Anecdotal reports are already indicating that sales declines are likely to accelerate into February. Domestic sales are said to be down 96% in the first week of February compared with the same period one year earlier. Cui Dongshu, secretary general of the China Passenger Car Association, said: “There was barely anybody at car dealers in the first week of February as most people stayed at home.”

Many established automakers and suppliers have hinged their business plans on China in light of its previously reliable sales growth, especially as western markets begin to contract having reached peak ‘motorization’. This means China’s latest sales figures will be a significant cause for concern for these companies, potentially requiring them to scale back revenue and profit forecasts.

Vousden continues: “The longer-term effects are difficult to quantify but it is likely that sales growth will continue to be stunted throughout the rest of 2020, even if the spread of COVID-19 can be contained. This is because many of the components that go into building vehicles all over the world are produced in China, in factories that are currently standing still because it is too risky for workers to return. The auto industry is poorly prepared for such supply chain shocks because many operations run on a ‘just-in-time’ basis, with very limited numbers of stockpiled parts.”

Already, companies such as Jaguar-Land Rover have confirmed they’ve had to resort to flying parts in from China to meet production demand. Others including Toyota and PSA have said they expect to see supply chain disruption while Fiat-Chrysler has warned it may have to halt some European production if parts supply continues to be affected.

These sudden drops in sales across the largest vehicle markets have, understandably, led to a significant drop in the seasonally adjusted annualized rate (SAAR) of sales for 2020. Global vehicle sales SAAR stood at 88.5 million in December 2019 but, just one month later, sank 10% to 79.7m.

Vousden concludes: “We’re seeing alarming drops in sales across the board in January 2020, and we expect that to lead to a much weaker overall market this year. Considering the market’s general weakness in 2019, the emergence of COVID-19 couldn’t have come at a worse time. Automakers and suppliers must prepare for lower sales, lower profits and disrupted supply chains throughout the coming year.”