Bahrain mega projects to deliver powerful message at Cityscape Global  that prospects are bright, despite oil prices and global events 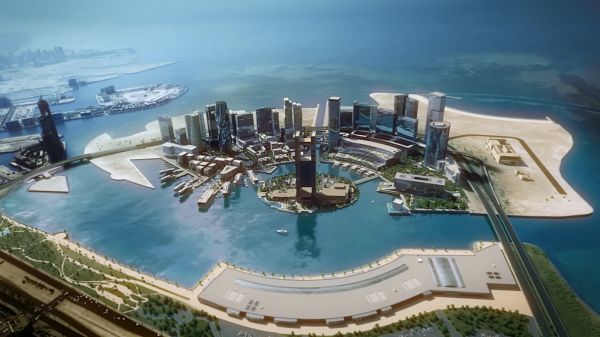 photo caption:  Bahrain Bay  – a master planned development that will be showcased at Cityscape Global 2016

With the construction industry reaching 4.5% year-on-year growth rate and the influx of 11.6m tourists in 2015 spurring job sector expansion and triggering demand in residential and retail property sectors,  Bahrain bolsters the GGC reputation as a real estate safe haven for international investors.

That will be the message delivered when Diyar Al Muharraq, a fully-integrated master-planned city comprising of 7 islands, and the USD 2.5 billion waterfront development, Bahrain Bay, are presented to international real estate players at Cityscape Global in Dubai next month.

Speaking ahead of their participation at the exhibition held at Dubai World Trade Centre from 6-8 September, Dr Maher Al Shaer, Chief Executive Officer of Diyar Al Muharraq, one of Bahrain’s largest, most visionary and progressive urban developments, said: “Real estate still remains a safe investment option, especially in this region.

“The GCC still holds its place as an attractive investment haven, especially for international investors. There is a fast-expanding population, high spending power and the quality of life remains very appealing for foreigners looking for better employment opportunities. All these factors provide a great framework for the real estate industry to thrive.

Added Dr Al Shaer: “If we look at Bahrain, there has been a surge in real estate projects as well as construction and retail industries with new malls, luxury hospitality offerings and the recovery of mixed-use developments previously put on hold.

“There has also been a surge in tourism motivated by a local drive to further Bahrain’s attractiveness as an exciting, all-encompassing destination for regional and international visitors. This is a great booster for the real estate sector.”

According to REIDIN, Bahrain’s tourism sector experienced 11% growth in 2015 and this trend is expected to continue, generating revenue of $1 billion by 2020.  This trend, combined with the government decision to allowing foreigners to acquire 100 per cent ownership of businesses in Bahrain will spur growth in the property.

“As such, Bahrain Bay Development, as a master developer is able to overlook short-term blips in the market including fluctuations in oil prices.

Master planned developments are unlike consumer goods which are quick to produce and quick to get absorbed. Real estate products take time to plan, develop and get absorbed. Bahrain, like most GCC countries is also exposed to a cyclical market.

“Bahrain Bay Development has already sustained two economic cycles and is currently on its third. Currently, there is positive momentum in the construction sector, especially in and around our development which will change the face of the heart of Manama.”

Cityscape Global presents a perfect platform to showcase investment opportunities for Diyar Al Muharraq. Spread over 12 square kilometres of reclaimed land, it offers a mix of residential and commercial projects aimed at creating a future sustainable township contributing significantly to the socio-economic development of Bahrain.

It will feature quality leisure, recreational and auxiliary facilities such as educational establishments, medical centres, shopping malls, expansive parklands, hospitality offerings and marinas, as well as over 40 kilometers of pristine waterfront and sandy beaches on completion.

Growing appetite and positive sentiment of investors resulted in almost 85% of land plots at Bahrain Bay being snapped up within a week while the entire infrastructure is completed and several projects of third party developers are also finished.

Now in its 15th edition, Cityscape Global 2016 has attracted more than 300 international and regional exhibitors covering 41,000sqm of exhibition space.