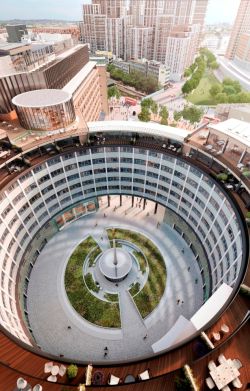 British representation at Cityscape Global this week has almost doubled year on year, as developers compete for Middle Eastern investment amid the post-Brexit vote and a period of uncertainty.

With the three-day real estate exhibition drawing to close today (Thursday), UK developers were reporting good levels of interest across the board from GCC investors.

Underlining the increased value in investment to visitors at the show, Elysian Global and Strutt & Parker showcased two significant projects in London – Stanhope’s Television Centre and Wanda’s One Nine Elms.

“In real terms for dollar buyers, our scheme is 10% better value today than it was before the Brexit vote – so there is a clear opportunity for GCC investors to capitalise on this fact,” said Peter Allen, Stanhope’s sales and marketing director for Television Centre, the iconic former home of the BBC in London’s White City.

“We’ve definitely seen a recent spike in enquiries from GCC buyers. This increased demand and the sales completed to date have given us the confidence that Television Centre resonates with buyers in the region.

“There was a period of uncertainty immediately after the Brexit vote but that is now passing and we are returning to ‘business as usual’.

The fundamentals of London remain – it is a truly global city that is the number one financial centre in the world, a transport hub, with the only global language and great education, entertainment and culture, a fair legal system, liquid property market with easy access, entry and exit and low inflation,” added Allen.

Other experts in the British real estate market have warned against a knee jerk reaction to the Brexit vote, but have pointed to bricks and mortar as an obvious investment in times of doubt.

Andy Phillips, Commercial Director at Knight Knox, a provider of buy-to-let opportunities in the private investor market, said that property provides a sense of permanence which cannot be matched.

“This is a particularly good time for foreign investors to enter the UK buy-to-let market as the current depreciation of the Pound means that UK property is essentially being sold at a steep discount,” he said.

“We expect to see the value of our business in the Middle East remain strong in the post-Brexit era, especially in the short term, and savvy investors step in to take advantage.

UK property remains one of the strongest and most secure investments in the world and we do not expect that to change in the future.”

Two of the key trends emerging from the show floor of Cityscape Global this week were newly competitive pricing options and a focus on liveability and the end user experience.

A host of developers are now offering payment plans such as 20% or 30% down payments and affordable financing in order to stand out and win over investors and first time buyers.

Tom Rhodes, Exhibition Director for Cityscape Global said that sentiment from the show floor indicates the emphasis on liveability is here to stay, with developers truly thinking about how people want to move around their homes and neighbourhoods.

“There has been a lot of interest in the new Jumeirah Central development, launched just a few days before Cityscape Global opened its doors, and the large scale model on the Dubai Holding stand has been incredibly busy.

“At the same time, we have seen the launch of DAMAC’s ‘inverted villas’, which place the bedrooms on the ground floor and the living areas upstairs, as a direct response to older family members struggling with stairs and requesting their rest areas to become more easily accessible.

These indicators tell us that the end user experience is now playing a key role in how developments on the whole, and villas and apartments particularly are designed and planned.”

Major launches at the event this year included the Palm 360 and Ibn Battuta Residences by Nakheel, new details on the Meydan One Mall by the Meydan Group, The Villages and The Pulse by Dubai South, which will be the world’s first city centred around the happiness of its residents, and the joint venture between Emaar Properties and Dubai South to create 15,000 homes in Emaar South.