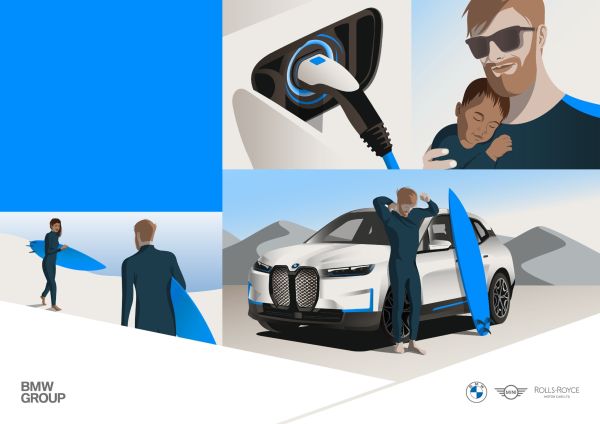 The BMW Group continued to demonstrate its high level of profitability in the period from July to September 2021, with revenues, profit before tax and net profit all at record levels for a third quarter. The Group’s strong performance during this period was driven in particular by favourable product mix factors and positive pricing effects for new vehicles as well as stable selling prices of pre-owned vehicles.

The BMW Group also posted new record figures for deliveries to customers, revenues and profit before tax for the nine-month period and, in light of this strong performance, confirmed its outlook for the full year at the quarterly press conference. The outlook for the current year was raised in an ad-hoc announcement dated 30 September, clearly demonstrating the Group’s underlying profitability.

At the same time, the Group is relentlessly driving forward the process of becoming a climate-neutral premium automobile manufacturer.

“The BMW Group shows how profitability and transformation go hand in glove. We see technological change as a great opportunity to strengthen our business model on a sustainable basis. With our focus on climate-neutral mobility, we are consistently driving the company forward to make it future-proof,” said Oliver Zipse, Chairman of the Board of Management of BMW AG, in Munich on Wednesday.

The BMW Group’s consistent focus on sustainability, ultimately leading to a circular economy, was underlined with the unveiling of the BMW i Vision Circular concept vehicle at the IAA in Munich in September. This first, fully recycled and recyclable vision vehicle created by the BMW Group provides a forward glimpse of sustainable premium mobility in the year 2040.

“When it comes to climate protection, the relevant question is: how big is the carbon footprint of a vehicle over its entire life cycle, including the impact of raw materials, industrial production, the active use of the vehicle and recycling? That is the currency that ultimately counts and the one by which our performance will be measured,” Zipse emphasised.

“That’s why our understanding of sustainability goes far beyond developing e-drive systems. We aim to leverage circular economy principles to achieve a maximum of climate protection – starting with the sustainable selection of individual raw materials for production and considering the life cycle of our vehicles as a whole.”

During the third quarter, the BMW Group received high acclaim from international automotive experts and journalists alike for its new, fully electric BMW iX and BMW i4 vehicles. Order intake worldwide is high for both models, with deliveries to customers due to start from this month onwards. “With the BMW i4 and the BMW iX, we are taking e-mobility to a new level.

The BMW iX is the innovation flagship that gives upcoming BMW models new capabilities that include 5G technology, the latest generation of software and the most advanced e-drive the BMW Group has ever developed. The BMW i4 comes straight from the heart of the BMW brand and offers customers a whole new dimension of driving pleasure. The statement we are making could not be clearer: If a vehicle bears the BMW badge, then it’s a genuine BMW – regardless of the drive variant,” said Zipse.

Growth in revenues and profit before tax

The BMW Group recorded significant sales volume growth in the first nine months of the current year, with deliveries rising by 18% to 1,932,224 units (2020: 1,638,167 units). In the third quarter, reduced production volumes of the BMW Group due to the supply situation impacted delivery figures. During the period from July to September, a total of 593,177 BMW, MINI and Rolls-Royce brand vehicles were delivered to customers (2020: 675,592 units; -12.2%).

The improved price penetration for new and pre-owned vehicles is primarily due to the BMW Group’s attractive product range, strong customer demand and the generally lower availability of vehicles due to the shortage of semiconductors.

“Business during the current financial year to date has benefited substantially from the favourable stable market situation and continued brisk demand,” said Nicolas Peter, Member of the Board of Management of BMW AG, Finance. “The latest set of reported figures underlines the operational strength of the BMW Group and demonstrates the outstanding commitment of our workforce.”

Looking ahead to the upcoming changes in the BMW Group’s business model, he added: “Our ability to generate profit is the prerequisite for transforming our business model. Our stated policy is to finance the necessary investments out of ongoing operations. With a combination of prudent planning, good management and a keen focus on efficiency and profitability, we are excellently positioned to do so.”

Research and development activities during the period under report were focused on new models as well as on the electrification and digitisation of the vehicle fleet and automated driving, in other words on key issues in terms of driving the process of transformation and strengthening the company’s future viability.

Group profit before financial result (EBIT) rose to € 10,913 million (2020: € 2,633 million) for the nine-month period and to € 2,883 million (2020: € 1,924 million) for the third quarter. In addition to improved pricing for new and pre-owned vehicles, as described above, EBIT also benefited from the unchanged low level of allowances required to be recognised for credit risks. The partial reversal of the provision for EU antitrust proceedings recorded in the second quarter also had a positive impact on nine-month earnings.

Other financial result went up to a net positive amount of € 940 million (2020: negative € 282 million; in the third quarter: positive € 173 million; 2020: positive € 200 million), whereby the improvement was mainly attributable to the continued favourable fair value development of interest rate hedges resulting from the rise in yield curves in the USA. The remeasurement of investments held by the BMW i Ventures fund as well as the investment in SGL Carbon had a positive impact.

Automotive segment sales in the third quarter of 2021 were impacted by semiconductor supply issues. Deliveries to customers in Europe and Asia were down, whereas sales in the Americas region rose year on year. Over the nine-month period, however, sales growth was recorded for all major regions worldwide, including an excellent performance on European markets, where deliveries of BMW, MINI and Rolls-Royce brand vehicles were up by 11.9% to 725,721 units (2020: 648,494 units).

Overall, the BMW Group has continued to strengthen its competitive position in all key regions. Mirroring this positive trend, sales volume growth at brand level also ranged between ‘solid’ and ‘significant’ for the nine-month period. Worldwide, BMW brand sales climbed by 19.3% (2021: 1,703,068 units; 2020: 1,427,392 units).

The nine-month financial result recorded by the Automotive segment amounted to € 1,711 million (2020: € 615 million, in the third quarter: € 374 million, 2020: € 383 million). As described above, the main driving factors were the improved result from the at-equity accounted Chinese joint venture BMW Brilliance Automotive Ltd. (BBA) and positive valuation effects recognised in other financial result arising on investments held by the BMW i Ventures fund as well as on the investment in SGL Carbon.

Free cash flow generated by the Automotive segment amounted to € 1,397 million for the third quarter and to € 6,299 million for the nine-month period. The increase in cash flows from operating activities mainly reflected higher earnings before tax and the favourable development of working capital. Automotive segment free cash flow for the full year is expected to be in the region of € 6.5 billion.

The Financial Services segment reported significant growth in new business with retail customers in the period from January to September with 1,509,195 new credit financing and leasing contracts signed, up by 12.4% on the previous year (2020: 1,342,803 contracts). New business concluded with retail customers during the nine-month period also rose sharply by 16.2% to € 48,000 million (2020: € 41,311 million), with the Chinese market in particular contributing to the recorded growth.

Segment earnings developed extremely positively in both the three-month and nine-month periods. Segment profit before tax (EBT) reached a new record level with € 2,924 million (2020: € 1,039 million, in the third quarter: € 988 million; 2020: € 458 million). Higher revenues generated from the remarketing of lease returns, particularly in the USA and the UK also drove up earnings. Moreover, segment profit benefited from the favourable risk situation as well as the stable margins arising on new business.

The BMW Group raised its outlook for the full year on 30 September. With its attractive product portfolio, it expects to continue benefiting from a sustained favourable product mix and positive pricing effects for new and pre-owned vehicles.

The BMW Group continues to forecast a Group profit before tax that is significantly higher than in the previous year.

The Automotive segment is expected to record a solid year-on-year increase in the number of BMW, MINI and Rolls-Royce brand vehicles delivered to customers and RoCE is forecast to improve significantly.

The EBIT margin for the Automotive segment for the full year is set to finish within a range of 9.5% to 10.5% (outlook prior to the ad-hoc announcement dated 30 September: 7% to 9%).

The Financial Services segment is forecast to achieve a return on equity (RoE) for the full year within a range of 20 to 23% (outlook prior to the ad-hoc announcement: 17% to 20%) due to the improved risk situation.

The Motorcycles segment is expected to record a significant increase in deliveries on the back of a positive market trend. The EBIT margin is set to finish within a target range of 8 to 10%, leading to a considerably higher level of RoCE than one year earlier.

The BMW Group also reaffirms its forecast for non-financial performance indicators. Accordingly, the proportion of women in management functions is expected to increase slightly. At the same time, the BMW Group is targeting a further significant reduction in the carbon emissions generated by its EU new vehicle fleet. According to current expectations, carbon emissions per vehicle produced are likely to fall moderately.

The Group’s targets for the year are to be met with a slightly smaller workforce. Forecasts for the current year are based on the assumption that economic and political conditions worldwide will not change significantly. However, any deterioration of these factors could have a negative impact on the BMW Group’s outlook.

“We are firmly on course to meet our outlook for the full year and we look ahead with confidence ,” said Nicolas Peter. “We expect the semiconductor supply situation to remain an issue beyond 2021.”

1In connection with a review of its sales practices and related reporting practices, the BMW Group has reviewed prior-period vehicle delivery data and ascertained that certain vehicle deliveries were not reported in the correct periods. BMW Group has revised the data on vehicle deliveries for previous years retrospectively. Further information on this matter is provided in the BMW Group Report 2020 from page 128. As BMW Group continues to enhance its policies and procedures regarding retail vehicle delivery data, it may not always be practicable for BMW Group to adjust prior period data (and any such adjustments would be of a de minimis nature without any material impact on the comparability of periods).

2 Including deliveries to customers of the joint venture BMW Brilliance Automotive Ltd., Shenyang.

3 Group profit before tax as a percentage of Group revenues.

2 Including deliveries to customers of the joint venture BMW Brilliance Automotive Ltd., Shenyang.

3 Group profit before tax as a percentage of Group revenues.

A new or pre-owned vehicle will be recorded as a delivery once handed over to the end user. End users also include leaseholders under lease contracts with BMW Financial Services and – in the USA and Canada – dealerships when they designate a vehicle as a service loaner or demonstrator vehicle. In the case of pre-owned vehicles, end users may include dealerships and other third parties when they purchase a vehicle at auction or directly from BMW Group. Vehicles designated for the end user and suffering total loss in transit will also be recorded as deliveries. Deliveries may be made by BMW AG, one of its international subsidiaries, a BMW Group retail outlet, or independent dealerships. The vast majority of deliveries – and hence the reporting of deliveries to the BMW Group – are carried out by independent dealerships.

Profit/loss before financial result, comprising revenues less cost of sales, selling and administrative expenses and the net amount of other operating income and expenses.

Profit/loss before financial result as a percentage of revenues.