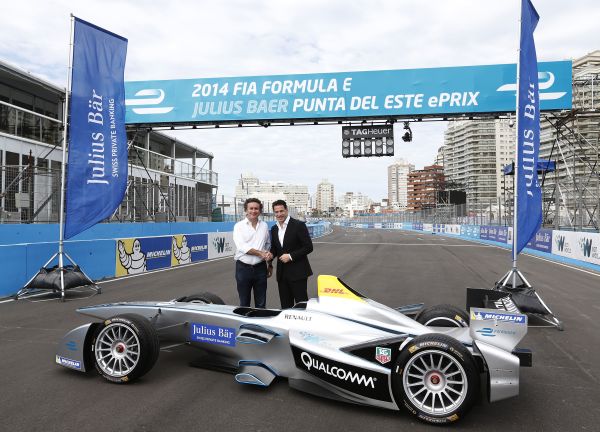 Leading Swiss private banking group Julius Baer has today been announced as the title sponsor for the third round of the all-new FIA Formula E Championship. Held on Saturday, December 13, the race will be titled the 2014 FIA Formula E Julius Baer Punta del Este ePrix.

For Julius Baer, Formula E, with its visionary approach and global reach, is an ideal sponsorship platform as it stands for many values Julius Baer shares, such as innovation, sustainability and forward-looking pioneering spirit. The Bank will leverage the sponsorship for high-class client events and a wide range of marketing activities and is already the exclusive global partner of Formula E with prominent branding on the circuit and the cars themselves.

“We are committed to growing into the future, not only through sustainable wealth management practices, but also by supporting ideas that are equally visionary in spirit. I look forward to seeing the development of this exciting, new fully-electric racing series and the positive impact of the Bank’s commitment,” said Marco Parroni, Head of Front Marketing at Julius Baer.

Alejandro Agag, CEO of Formula E, added: “After announcing them as our global partner ahead of the first race, Julius Baer have continued to show their support and commitment to Formula E and our values of sustainability and innovation. We are delighted to welcome them as a title sponsor for tomorrow’s race which we’re sure is going to be a fantastic spectacle.”