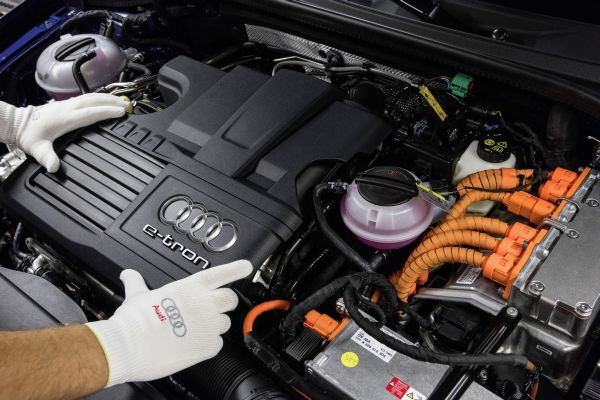 Audi CEO Rupert Stadler: “We are strengthening our innovative areas and expanding the global production network”

Audi is further expanding the biggest investment program in its history. From 2015 through 2019, the Ingolstadt-based company plans to invest €24 billion, which is €2 billion more than in the previous planning period. 70 percent of the investment will flow into the development of new models and technologies.

Audi aims to meet stringent CO2 limits worldwide with a new generation of extremely economical combustion engines and alternative efficiency technologies. Furthermore, new features in the areas of connectivity and driver assistance are designed to extend the “Vorsprung durch Technik” of the brand with the four rings.

At the same time, the company is expanding its worldwide production network. More than half of the planned investment will take place at the German sites in Ingolstadt and Neckarsulm.

Audi plans to develop new cutting-edge technologies and to create additional production capacities worldwide in the next five years through large-scale investment.

“We place top priority on sustainable growth. That’s why we are making large investments in the innovative areas of electric mobility, connectivity and lightweight construction,” stated Rupert Stadler, Chairman of the Board of Management (CEO) of AUDI AG. The company is also pushing ahead with the expansion of its global production network.

The total investment volume of €24 billion comprises approximately €17 billion of investment in property, plant and equipment and €7 billion of capitalized development costs.

“70 percent of all our investment in the next five years will flow into new models and innovative technologies,” explained Board of Management Member for Finance (CFO) Axel Strotbek.

“Despite the growth in total investment, we will keep a watchful eye on the upcoming challenges and exercise the required cost discipline,” stated the CFO. Top priority is being placed on progressing as efficiently as possible. The expansion of international manufacturing structure and higher advance expenditure for new models and technologies, in particular to meet stricter CO2 limits worldwide, require enormous efforts from the entire workforce.

In order to fulfill the ambitious CO2 limits, the company is working not only on the next generation of fuel-efficient gasoline and diesel engines, but also on plug‑in hybrids such as the Audi A3 Sportback e‑tron*, which became available in the first markets at the end the year.

“We are constantly further developing alternative drive systems and focusing above all on connecting the car with its digital environment,” explained Dr. Ulrich Hackenberg, Audi’s Board of Management Member for Technical Development.

“The car will communicate with the driver, the Internet, the infrastructure and other vehicles, while moving in an environmentally friendly manner.” The new Audi TT* is a pacemaker in terms of seamless connectivity. Its integrated Audi virtual cockpit, which merges a combination of instruments and an MMI screen into a central digital unit, sets new standards.

A few weeks ago, Audi presented the A7 Sportback h‑tron quattro concept car at the Los Angeles Motor Show, demonstrating that the premium manufacturer has also mastered fuel‑cell technology. “We can move into the series-production stage as soon as justified by the market and infrastructure,” stated Hackenberg.

By the end of the year 2020, the Ingolstadt-based company intends to expand its model portfolio from 50 to 60 models. A main focus will be on new models in the C and D segments. Audi also intends to expand the successful Q family*. As of 2016, for example, the new Audi Q1 will be produced in Ingolstadt.

Another important element of the biggest investment program in the company’s history is the expansion of manufacturing structures in Germany and abroad: “The sites in Ingolstadt and Neckarsulm are the basis for our international success. We therefore plan to make more than half of the total investment in Germany,” emphasized Strotbek.

The production plant in Ingolstadt is already being prepared for new models. Extensive rebuilding work will start also in Neckarsulm in 2015, in order to prepare the plant for the next generation of the Audi A8 luxury sedan.

The workforce will also grow in the context of the investment in the main plants in Germany. In the past twelve months, Audi has recruited approximately 3,000 new employees in Germany alone. “We will continue to recruit in 2015, thus underpinning our course of sustainable growth,” said Audi’s Board of Management Member for Human Resources, Thomas Sigi.

In addition, Audi will promote its own young talent and will once again provide specialist training to 700 young people. “We want to strengthen our core competencies, especially in key technologies, with a strong team in the domestic plants,” continued Sigi.

Worldwide, the Audi Group’s workforce has now grown to the record size of 80,000 employees. In Mexico and Brazil, the company is investing in new plants so that it can fully utilize the growth potential of the American continent. In this way, the premium producer from Ingolstadt will make sure it is even more independent of exchange‑rate fluctuations in the future.

Audi opened a training center to provide qualifications to new employees in San José Chiapa in October. As well as the 1,200 people who have already been recruited, the company plans to take on board another 850 employees in Mexico alone next year. As of 2016, the Audi Q5* will drive off the assembly lines there.

The ongoing high investment in the development of new models and technologies will become tangible for customers already next year in the form of numerous products.

In addition to the new generation of the A6 family * in the large‑car segment, deliveries of which started in the fall of 2014, the new Audi Q3* and Audi RS Q3* will go into production with many innovative technologies in the New Year.

And the new Audi A1* and A1 Sportback* will be launched in 2015, also with innovative three‑cylinder engines.

Audi will reach the mark of 1.7 million cars delivered in 2014. By 2020, the company aims to be the premium brand number one on a sustainable basis.

*Fuel consumption of the models named above: