• Eurostar reliability is unparalleled: the Inmarsat-2 F2 holds the world’s longevity record in geostationary orbit and no satellite has ever been lost in orbit

Astrium, the world’s second largest space company, is today celebrating more than 500 years of combined operation in orbit clocked up by its highly successful series of Eurostar satellites since their introduction in 1990.

The Eurostar geostationary communications satellites, designed, developed and manufactured by Astrium, have achieved a remarkable record of reliability in service with the world’s most prestigious operators.

Since the launch of the first ever Eurostar, Inmarsat-2 F1, on 30 October 1990, 56 Eurostars have been successfully delivered into geostationary orbit and 41 remain operational. The other 15 have been retired after having surpassed their mission lifetime by an average of 27 %.

Seven Eurostar satellites are currently in operation beyond their design lifetime, including Inmarsat-2 F2. Launched more than 22 years ago and far outliving its projected life-span of 10 years, it holds the world’s longevity record in geostationary orbit. No Eurostar satellite has ever been lost in orbit.

“Five hundred years of successful operation is a fantastic achievement for the Eurostar series and a testimony to the skill and expertise of Astrium’s staff, the soundness of our design solutions and the quality of our production process,” said Eric Béranger, CEO of Astrium Satellites. “Our customers include many of the main operators and they keep returning to us. This is a welcome testament to their trust in our platform.”

All Eurostar satellites are based on the same fundamental and proven architecture. When they were introduced in 1990, Astrium was the first satellite manufacturer to introduce fully digital electronics on commercial satellites. From the outset, Eurostar was designed to be highly modular so that it could be easily customised to meet specific customer requirements. Successive versions of the satellite have been enhanced by drawing on proven design features and equipment.

Through the course of the Eurostar line’s lifetime, Astrium has adapted it significantly, making the satellites larger and more powerful, but also more efficient. In a staged evolution, launch mass has increased from 1,300 kg to more than 6,000 kg. The current version, Eurostar E3000, offers in-orbit operation for more than 15 years with a payload power of between 4 to 15 kW, and has the capacity to operate more than 100 transponders.

Among the impressive number of innovations is the successful demonstration of the in-orbit Lithium-ion batteries on the Eurostar E3000, a first for commercial satellites and a revolution in telecommunications satellite power.

With 12 Eurostar E3000s currently in production for leading operators worldwide, Astrium has established itself as a global player in the design and manufacture of exceptionally reliable, high performance telecommunications satellites. 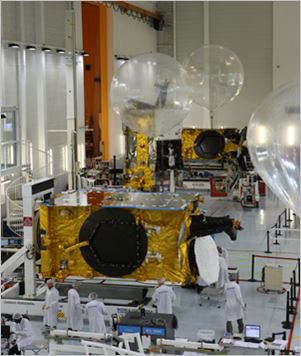 Astrium is the number one company in Europe for space technologies and the second in the world. It is the only global company that covers the full range of civil and defence space systems, equipment and services.

Astrium is a wholly owned subsidiary of EADS, a global leader in aerospace, defence and related services. In 2012, the Group – comprising Airbus, Astrium, Cassidian and Eurocopter – generated revenues of €56.5 billion and employed a workforce of over 140,000.

Effective from January 1, 2014, Astrium will be integrated into Airbus Defence and Space together with Airbus Military and Cassidian.