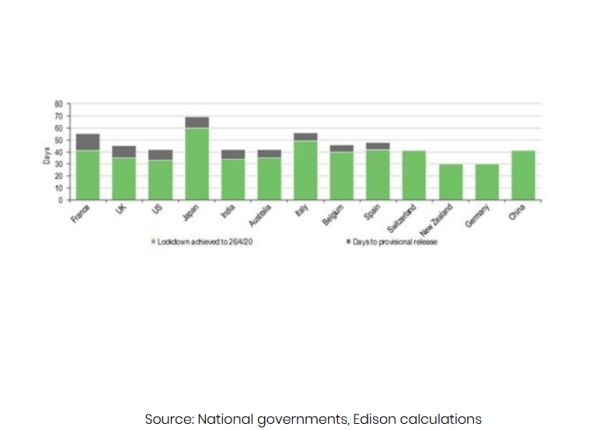 Furthermore, it is not the case that all developed nations are equal in the face of COVID-19. Existing fragilities in terms of debt sustainability will be emphasised in nations with higher debt/GDP burdens such those in Southern Europe. Furthermore, the higher share of tourism and leisure in GDP risks a very difficult summer for these regions as those activities are likely to be among the last to recover.

For these reasons, the EU and its member states will have to move swiftly to implement fiscal policies which can accommodate the very large deviations from trend GDP now expected in southern Europe. During this healthcare crisis, the spread between Italian government 10-year bonds and German bunds has risen from 1.5% to close to 2.5%, highlighting the risk of a failure to reach an agreement to once again support the economies at the periphery of the eurozone.

The beauty of Mario Draghi’s original “whatever it takes” speech in 2012 was that in the end only the prospect rather than the actuality of “Outright Monetary Transactions” were needed to restore confidence. Following coronavirus, specific and actual policy support is likely to be needed to ensure all nations within Europe can continue to fund themselves through a period of economic growth as weak as 2008.

An initial EUR 540bn healthcare-related support package, finally agreed last week, is unlikely to be sufficient to compensate for the substantial shortfall in GDP expected in 2020.

EU commission talk of a trillion dollar recovery fund remains notional for at least for as long as Northern nations resist moves towards common debt instruments, such as corona-bonds. We believe investors should carefully monitor policy in Europe as there remains a risk that long-standing political impediments to wealth transfer obstruct the necessary financial flows required to deal with the fallout from COVID-19.

According to reports, there remains the long-standing division between France, Spain and Italy which favour grants to tackle the damage from COVID-19 and Northern European nations such as Germany where Angela Merkel has insisted any aid must ultimately be repaid. We expect there to be further wrangling over the matter at least until mid-May when the EU is expected return with further proposal, but would caution that earlier calls for mutual debt instruments appear to have been firmly ruled out.

In terms of equity valuations, markets have on a global basis re-traced 50% of the initial losses following the introduction of substantial support programs from central banks. On a price/book basis, the top 600 global companies worldwide no longer appear inexpensive following the market recovery.

Similar rebounds in pricing to equity markets are also visible in credit markets as spreads have tightened notably since the peak of the sell-off during March.

Excess returns from broad market exposure therefore appear to be in the rear-view mirror on a global basis. European equities do appear relatively cheaper even after the recent recovery, although investors there have to contend with both Brexit and potential eurozone stability remaining as outstanding question marks.