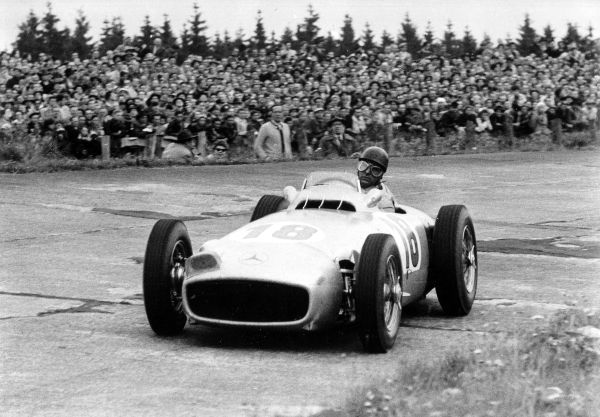 At the “Goodwood Festival of Speed Sale” conducted by British auction house Bonhams on 12 July 2013, all eyes turned to lot number 320: a Mercedes-Benz type W 196 R Grand Prix racing car – an original grand prix car of Juan Manuel Fangio dating from 1954 and to date the only post-war Silver Arrow in private ownership.

The hammer fell at 17.5 Million GBP – a record price for an auction car. The vehicle was sold to a so far unidentified telephone bidder who effectively pays 20,896,800 GBP (about 31.6 million US$) including due premiums.

“The result of the auction just goes to show the exceptionally high level of respect enjoyed by historical Mercedes-Benz vehicles among collectors”, said Michael Bock, Head of Mercedes-Benz Classic. “We would like to congratulate the unidentified bidder on their purchase and will be only too happy to lend them support – if they so wish – during the next stages of their acquisition.”

In total there are only 10 examples of the 14 vehicles which were previously built of this model still in existence: six W 196 R models belong to the Mercedes-Benz Classic collection, a further three vehicles are in museums in Turin, Vienna and Indianapolis; and the vehicle which was put up for auction in Goodwood, with chassis number 006/54.

This vehicle already was the only remaining original Silver Arrow from the post-war period which is in private ownership.

It was at the wheel of the Mercedes-Benz Silver Arrow type W 196 R with chassis number 006/54 that Juan Manuel Fangio won the German and Swiss Grand Prix races in 1954. With these victories Fangio
laid the foundations for his first Formula 1 World Championship title with Mercedes-Benz. At the same time, the Stuttgart-based brand also celebrated a triumphant return to the sport of Grand Prix with the W 196 R in 1954 .

Prior to the auction, experts from Mercedes-Benz Classic carried out extensive checks on the Silver Arrow, which was donated by the then Daimler-Benz AG to the National Motor Museum in Beaulieu (England) in 1973 and sold by the museum 1980, as part of a manufacturer’s expert report .

Based on these detailed checks and the full set of documentation compiled by Mercedes-Benz Classic, the brand historians produced a detailed expert’s report confirming the vehicle’s originality and authenticity. “Our expert’s report means that the new owner need have no uncertainties whatsoever about this racing car”, said Michael Bock.

“It fully and unequivocally confirms the history and originality of the vehicle.” The fact that Mercedes-Benz Classic provides such a high level of expertise for collectors and fans of the brand’s historical cars adds to the positive trend in the value of Mercedes-Benz classic vehicles.

The history of the S-Class is the subject of a special exhibition at the Mercedes-Benz Museum which runs until 3 November 2013.